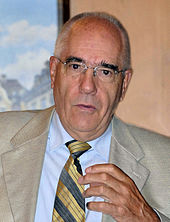 Walter Flemmer (born March 26, 1936 in Munich ) is a German author and director and for many years was deputy television director and cultural director of Bayerischer Rundfunk .

After studying German, history, philosophy and geography, Flemmer worked as a freelancer for newspapers, magazines and Bavarian radio from 1960 . From 1962 he worked permanently at Bavarian Television as head of the “main course program department”. For the program group “Education and Training” he becomes the coordinator and deputy of the television director. Until 2001 he was deputy television director and head of culture. Flemmer is the initiator, author and director of programs such as “ Spielschule ”, “ Das feuerrote Spielmobil ”, “ Schauplätze der Weltkulturen ”, “ Watching, Relaxing, Reflecting ”, “ The Cultural Talk ”, “ Alpha-Forum ” and co-producing international cultural programs. From 2001 to 2011 he was President of the Bavarian Academy for Television .

He is with Dr. Ursula Flemmer married. They have three daughters, a son and nine grandchildren.

Walter Flemmer publishes in the fields of prose , poetry , anthologies and non-fiction books , including:

as well as libretti for various musical performances.