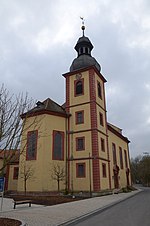 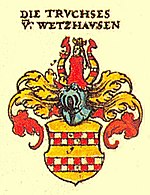 The village was probably founded around the year 700 AD.

Since the middle of the 14th century, Wetzhausen Castle has been the ancestral seat of the Truchseß von Wetzhausen family , who belonged to the Imperial Knighthood. The former castle was destroyed in the Peasants' War, rebuilt from 1569 and then rebuilt several times. As a Ganerbeburg , the castle was inhabited by two Truchsess lines and therefore has two knight halls. It is a four-wing complex, each about 30 meters long, with an almost square inner courtyard. From 1976, the roof, facade and statics of the listed castle were renewed with state subsidies, but the interior has not been renovated and is partially dilapidated due to the long vacancy. Among other things, it was used as a recording studio and used for university exercises for the Bamberg master’s degree in monument preservation and filming. The commitment to the preservation of monuments has received several awards, also outside of Bavaria. The castle was sold to the sculptor Daniel Eggli by the Truchseß family in 2018.

On May 1, 1978, the previously independent municipality was incorporated into the Stadtlauringen market.

The village has been mainly Evangelical-Lutheran since 1546, when the first Evangelical preacher was appointed there during the Reformation . Since 1968, Craheim Castle near Wetzhausen has been the seat of an ecumenical conference center and the community for Christian unity

There is a theater group led by the writer and director Anne Maar , Paul Maar's daughter . This group, the Alte Scheune theater , performs a newly rehearsed piece every year in the first quarter.

From 1948 to 1955 the old castle in Wetzhausen housed the Franconian Theater , which is now located in Maßbach .

For a small village like Wetzhausen it is quite unusual to have already served as a backdrop for filming several times:

Due to the partnership with a Protestant church in Tanzania, there is a Tanzania choir . Every now and then there is a concert of the Franconian Organ Days in the church .

Districts of the municipality of Stadtlauringen