Paul Maar (born December 13, 1937 in Schweinfurt ) is a German children's author , illustrator , translator , screenwriter and playwright who lives in Bamberg . Paul Maar wrote children's books because he felt that there weren't enough good children's books. After he published his first work in 1968 and was asked for more, he initially worked as a freelance writer and illustrator. He is particularly known for his series Das Sams . 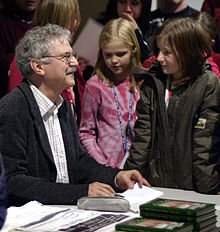 After the early death of his mother, Paul Maar was looked after by housemaids until his father remarried.

During his father's long-term captivity in the US, UK and France, Maar and his stepmother moved to live with their step-grandfather in rural Theres in Lower Franconia. This grandfather owned an inn, where he often told the guests stories that he expanded over the weeks. This gave Paul Maar a feeling for how to turn a process into a narrative. The grandfather also encouraged him to write down the stories he had invented in a notebook.

When Maar's father returned from captivity, the family moved back to their old place of residence. Now he lived in an environment that was hostile to reading and was prevented from reading rather than encouraged by his father. In addition, there were only a few children's books - shortly after the Second World War. The only children's books in the house were a copy of Grimm's Fairy Tales , Robinson Crusoe , The Indian Stories of Drabben and The Story of the Wooden Boy (Pinocchio) . In the absence of a public library and because the private lending libraries demanded high fees, Paul Maar borrowed adult books free of charge from the library of the Amerika-Haus in Schweinfurt, even if he did not always understand them. Because he was not allowed to read at home, he deposited the books with a friend whom he visited on the pretext of doing homework there . He then read in his room while the friend played soccer with his brother outside.

His father, the master craftsman, was frustrated with both the “failed son” and the lost years of captivity. Maar later said he did not want to read books about children in a similar family situation during this time. As a child, Paul Maar was often bullied by stronger boys. This experience recurs frequently in his books. Martin Taschenbier is teased by classmates, his book character Lippel is no different.

In an interview with Hamburger Abendblatt , Paul Maar argued that children's book authors had an extreme childhood:

“Either they were as well protected as Astrid Lindgren , who lived off this sunny childhood. Or else they had a hard time and later invent the childhood that they had not had. I count myself among the second. "

Maar attended the Alexander-von-Humboldt-Gymnasium Schweinfurt and made a name for himself there with his artistic talent and as an author for the school newspaper. In the Abitur class he met his future wife Nele Ballhaus , who came from a girls' school and wanted to take her Abitur at a state school.

Paul Maar studied after graduating from the State Academy of Fine Arts in Stuttgart . During the semester break he worked as a set designer and theater photographer at the Franconian Theater Schloss Maßbach . After completing his studies, he was a trainee lawyer in Stuttgart-Feuerbach . For six years he worked as an art teacher at the Albert-Schweitzer-Gymnasium in Crailsheim and at the Eduard-Spranger-Gymnasium (Filderstadt) .

Maar came to write because the theater manager complained that there were no new plays for children and that he had to play Sleeping Beauty or The Seven Little Goats again and again . The result was Maar's first play The King in a Box . In the process, he also learned to put what he had developed at his desk into practice on stage. As a result, he wrote his next piece, Kikerikiste, shortly afterwards . The piece was a great success and was even played abroad. For him, however, this success was an obstacle, because he believed that a new piece would not necessarily achieve the same quality and therefore put off working on new theater pieces. Instead, he preferred to write new children's books.

Maar only wrote children's books when he had children of his own. Disappointed about the poor quality of the children's books of the time, he wrote the stories about a tattooed dog in 1967 . In an interview he said:

“None of the books I took from the city library to my children when I was a student and read them to me. They were dusty and conventional and in part still breathed the spirit of the Third Reich. "

He showed the finished manuscript to a bookseller at the Wendelin Niedlich bookstore in Stuttgart. Shortly afterwards this was passed on to a publisher who presented her with the new publications of the year. A little later Maar received an invitation from the Hamburg publishing group Friedrich Oetinger . The publisher Friedrich Oetinger made it clear to him that he liked the manuscript, but if he was thinking of writing a children's book in order to then turn to “serious” literature, then he could pack his manuscript right away. He had no desire to build a young author who was a shame to write for children. Friedrich Oetinger made him promise to continue devoting himself to children's literature, and so Maar stuck to children's literature, although he intended to write mainly for adults.

As an art teacher, Paul Maar wanted to illustrate the book himself, but the publisher did not agree. He only got into illustrating after the book turned out to be a success. After his first successes as a writer, Maar gave up the profession of art teacher and has been working as a freelance author and illustrator since 1976. He has been a member of the PEN Center Germany since 1997 .

In 1998 Paul Maar donated the Paul Maar scholarship to support young writers in children's and youth theater . The scholarship program was limited to ten years and was discontinued in December 2008.

He has three grown children and lives in Bamberg. Together with his wife Nele Maar , he translates children's books from English. His daughter Anne Maar and his son Michael Maar are also writers.

Maar's best-known works are the stories that deal with Sams , an enigmatic and cheeky mythical creature, and were filmed in Bamberg under the title Das Sams , Sams in danger and Sams im Glück . The stories about Sams have autobiographical elements, as Mr. Taschenbier, the “adopted” father of Sams, is just as shy as the young Paul Maar was. The Sams is the exact opposite of that: cheeky and cheeky. The appearance of the Sam was determined by Maar's children who only agreed to its appearance after more than twenty drafts. The wish points should actually be freckles. But since Paul Maar, distracted by a phone call, forgot to wash out the brush with which he had previously painted Sam's blue suit, the brown color for the freckles mixed with the blue, turning them into blue and later into so-called wish points have been reinterpreted.

There was also a role model for the strict Frau Rotkohl, albeit under a different name: She was the caretaker who denigrated the children of the Maar family playing in and around the apartment building. His children were especially amused when they heard stories in which this woman had to say the opposite of what she was trying to say.

Maar's books, however, also contain many literary allusions, for example to ETA Hoffmann's works and his stay in Bamberg, which, however, are not understandable for children, but were built in for their own enjoyment: The double motif at ETA Hoffmann is repeated with Martin Taschenbier, who also has a doppelganger. Hoffmann's talking dog Berganza also appears in Ein Sams for Martin Taschenbier . In a key story by ETA Hoffmann there is the strange child , and when it first appears, Sams is called the strange child . In ETA Hoffmann's story The Stranger Child there are two children named Felix and Christlieb. The two attendants in the school camp are then called Mrs. Felix and Mrs. Christlieb. The Taschenbier family lives on ETA-Hoffmann-Straße, and Martin's bus leaves at Schillerplatz, because the ETA-Hoffmann-Haus, Hoffmann's former apartment, is on Bamberg's Schillerplatz. There are also allusions to poetry, especially Dadaist and nonsense poetry, as befits Sams, some to Morgenstern's gallows songs and some to Ernst Jandl. That's why the Sams books are also enjoyable to read for adults.

Maar is also responsible for many classics from the Augsburger Puppenkiste and has also written other children's books. He also designs picture stories for magazines. Of his own works, among other things, he is most satisfied with Lippel's dream and Anne wants to become a twin .

Some of his children's theater pieces are consistently successful, especially his classic Kikerikiste (1972), for example, is staged around the world from Russia, Europe to the USA ( Noodle Doodle Box ).

Numerous schools were named after Paul Maar during his lifetime: