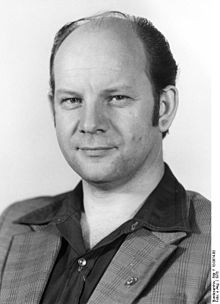 Wolfgang Herger (born August 10, 1935 in Rudolstadt ) is a former German politician. In the GDR he was the head of the security department at the Central Committee of the SED .

Herger became a member of the FDJ in 1949 and joined the SED in 1957. He studied from 1953 to 1958 at the University of Jena (FSU) philosophy . Until 1962 he was an assistant at the Institute for Philosophy of the FSU and FDJ or SED functionary. In 1963 he received his doctorate as Dr. phil. at the University of Jena with the thesis “On the dialectic of social necessity and moral freedom in our era. Investigations into basic questions of Marxist-Leninist ethics. ”From 1964 to 1976 Herger was secretary at the Central Council of the FDJ and from 1971 to 1990 a member of the People's Chamber , 1971–1976 as a member of the Committee for National Defense, 1976–1985 as Chairman of the Youth Committee and 1986–1990 as deputy chairman or chairman of the Committee on National Defense. From 1976–1989 he was a member of the Central Committee of the SED , where he was head of the youth department from 1976–1985 and the security department from 1985–1989. In both functions he worked with his superior, Central Committee Secretary Egon Krenz . He was also a member of the National Defense Council of the GDR (NVR) and from 1985 to 1989 the College of the Ministry of National Defense . Herger received the Patriotic Order of Merit in 1973 .

From November 8th to December 3rd, 1989 Herger was a member of the Politburo and Secretary of the Central Committee of the SED and until January 15, 1990 a member of the party executive of the SED- PDS . With Egon Krenz he was one of the politicians who contributed to the peaceful change in the autumn of 1989. After that he was unemployed and then worked as a porter and employee of various trading companies. In November 1992, Herger worked for a few weeks as a recreational supervisor in a civil service school run by the Federal Office for Community Service in Kablow-Ziegelei, south of Berlin.

Condemnation in the wall rifle trials

On July 24, 1998, the Berlin district court sentenced him to 22 months suspended prison sentence for “aiding and abetting manslaughter ” (political responsibility for the fatal shots at the Berlin Wall ) . The former Deputy Defense Minister Horst Brünner and two other leading GDR military officials ( Manfred Grätz and Heinz Tappert ) were convicted together with Herger . The court held the four defendants jointly responsible for the GDR basic orders for "border security". They would have accepted the death of refugees approvingly.