Printed version of the 1906 manifesto.

The Vyborg Manifesto ( Russian Выборгское воззвание , wiss. Transliteration Vyborgskoye Vozzvaniye , also Vyborg Manifesto or Vyborg Appeal ) of July 9th jul. / July 22, 1906 greg. was a call for resistance against the government of Tsar Nicholas II , initiated by members of the liberal Constitutional Democratic Party of Russia , after he had dissolved the 1st State Duma . The total failure of the appeal, which was also supported by members of other parties, deepened the rifts between the bourgeois-liberal and the left opposition to the tsarist autocracy . 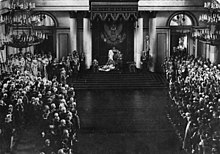 Opening of the 1st State Duma by Tsar Nicholas II.

During the Russian Revolution of 1905 , the Tsar issued the so-called October Manifesto . This envisaged the election of an all-Russian parliament as the most important concession to the insurgents. The government thus succeeded in dividing the opposition: the liberal, bourgeois forces saw the goal of the revolution with the manifesto, while the left-wing parties regarded it at best as the starting point for further radical changes in state and society. When the tsarist government took advantage of this split in order to take safe action against striking workers and revolting peasants, the left largely boycotted the election to the first State Duma . The Constitutional Democrats, who were also called “Cadets” because of their party abbreviation KD, took part in it. They made up the largest parliamentary group with 153 of 448 deputies and with Sergei Muromzew also the Duma chairman.

The parliament was on April 27th jul. / May 10, 1906 greg. opened by Nicholas II, but already on July 8th jul. / July 21, 1906 greg. dissolved again. The tsar was encouraged to do so because the military had the situation in the country largely under control again. The reason for his step were legislative initiatives of the Duma factions, which provided for a comprehensive agrarian reform: Both state and private land of large landowners was to be expropriated in favor of the peasants, who mostly lived on the edge of the subsistence level. The only disagreement was whether or not the landowners should be compensated. The government rejected the project in any form. Since the tsar had never granted the October Manifesto the status of a constitution that could have restricted his position as autocrat, he saw the dissolution of the Duma as his right. His actions against this provoked stormy protests among the Cadets and other liberal and left-wing MPs.

Member of the 1st Duma at Vyborg train station

On the day the parliament was dissolved, members of the Trudowiki peasant party called for a protest meeting. The radical wing of the Cadets also joined this demand. Since both the Duma meeting room and the Cadets' clubhouse in Saint Petersburg were surrounded by police and the military, the meeting was convened in the Finnish spa town of Vyborg , 150 kilometers away . Already on the evening of July 8th . / July 21, 1906 greg. About 200 delegates met there, chaired by Duma President Muromzew. During the night they discussed two drafts of the manifesto. While the Trudoviki wanted to call for mutiny in the army and navy, the cadets only advocated civil disobedience .

The next day, July 9th . / July 22, 1906 greg. , they finally adopted the draft manifesto drawn up by Pavel Miliukov , who was a member of the Constitutional Democrats but not the Duma. His text condemned the tsar's measure as an "attack on the parliamentary principle" and called on the citizens of all of Russia to civilly oppose the autocratic government. The population should act in a similar way as during the general strike in the revolutionary year 1905. Above all, the manifesto called on them to deprive the state of its financial and military means of power by general refusal to pay taxes and military service . Should the tsarist government take out loans without parliamentary approval, the Duma would not give its approval even after the fact. In Vyborg, 180 deputies or party members of the cadets of the Trudoviki, the Social Democratic Workers' Party , the Social Revolutionaries and representatives of the Muslims signed the manifesto. Later, 52 other people added their signature.

On the day of its adoption, the Vyborg Manifesto was printed as a leaflet in Finnish and Russian and 10,000 copies were circulated. It was also reprinted abroad.

Assembly of the Defendants in the Vyborg Trial of 1907

Due to their strength in the 1st Duma, the Cadets saw themselves as spokesmen for the entire people and believed they could exert a great deal of influence on the broad masses. Their electoral success, however, was largely due to the fact that most left parties had boycotted the 1906 Duma election. The lack of response to the Vyborg Manifesto now showed that the Cadets essentially only represented the bourgeois elites and liberal nobles, not “the people”. The majority of the population, especially the peasants, took no notice of the manifesto. Even many cadets refused to put their signature on the paper. The appeal went unheard. The apparent contradiction between the claims of the Cadets and reality encouraged the tsarist government to take decisive action against the signatories and disseminators of the manifesto. Russian newspapers that reprinted the manifesto were confiscated and those responsible were sentenced to prison.

Criminal proceedings were initiated against the signatories on July 29th. In December 1907, 167 out of 169 defendants in the so-called Vyborg Trial received three-month prison sentences. This meant that they were no longer allowed to stand in the subsequent Duma elections in 1907 and 1912, nor were they allowed to hold any state offices. Therefore - and because the Tsar changed the electoral law in favor of the conservative forces after the dissolution of the 2nd State Duma in 1907 - the cadets in the mostly conservative parliaments elected at the end of 1907 and 1912 mostly belonged to the moderate wing.

The failure of the Vyborg Manifesto not only made the cadets' overestimation of themselves and their break with the labor movement obvious to everyone. It also highlighted the deep gulf that existed between mostly rural Russia and the liberal, urban elites. This gap could not be bridged even after the February Revolution of 1917 , when the Cadets appointed Prince Lvov as the first Prime Minister and Pavel Milyukov as the first Foreign Minister of the Russian Republic . This inability played a decisive role in preventing a stable democracy from being built in 1917 either.

Members of the Duma Presidium

Members of the Cadet Party

Members of other parties and independents