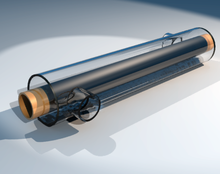 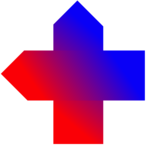 Heat exchangers can be divided into three classes with regard to heat transfer :

Direct heat transfer
is based on the process of combined heat and mass transfer in separable material flows. A representative application is the wet cooling tower .
Indirect heat transfer
is characterized in that material flows are spatially separated by a heat-permeable wall. Heat exchangers of this class are also called recuperators . This class includes: B. Radiators.
Semi-indirect heat transfer
uses the properties of a heat storage system. Both substances are brought into contact with the heat accumulator with a time lag. The heat accumulator is alternately heated by the hotter medium and then cooled by the colder medium in order to transfer thermal energy from the hotter to the colder medium. Heat exchangers of this class are regenerators , e.g. B. the heat wheel .

The extent of the heat transfer depends heavily on the geometric guidance of the two material flows to one another. There are five basic forms to be distinguished here.

Countercurrent
guides the substances in such a way that they flow past each other in an oncoming direction. In the ideal case, the temperatures of the material flows are exchanged, which means that the originally cold medium reaches the temperature of the originally hot medium and vice versa. The prerequisites for this ideal case are the same heat capacity flows on both sides of the heat exchanger and an efficiency = 1 of the heat exchanger. Therefore, in practice, it is not possible to completely swap temperatures. One application is heat recovery .
Direct current
guides the fabrics side by side in the same direction. Ideally, both material temperatures are equalized and always lie between the initial temperatures. The direct current is used, for example, if fast, reliable cooling is necessary. The material stress caused by the temperature differences can be a disadvantage.
Cross flow
guides the material flows in such a way that their directions cross each other. The result is somewhere between countercurrent and direct current. The cross flow is used, for example, to bring one flow to a certain, fixed temperature.
Eddy current
swirls two different hot material flows. A possibility for subsequent separation is necessary. One possibility for this is the vortex tube , a device without moving parts that can be used to split gas into a hot and a cold stream.

Combinations of these basic shapes are also used, as their advantages complement each other.

For good efficiency, the component that separates the media must have good thermal conductivity and a large surface. A turbulent flow is beneficial for good heat transfer . This takes place above all with a high Reynolds number . Therefore the flow rate should be high and the viscosity of the media low. However, high speed and a large wetted surface also require a high expenditure of energy to pump the media through the heat exchanger.

In heat exchangers in which one medium is a liquid and the other medium is a gas (mostly air), the heat capacities differ greatly depending on the volume of the media. Much more gas than liquid has to flow through, and the area for heat transfer has to be increased on the gas side. This is often done by means of ribs or sheets, e.g. B. in high-temperature radiators, the cooling coils on the back of a refrigerator or air conditioning and the radiator of the car.

In most cases, heat exchangers are made of metal , but also of enamel , plastic , glass or silicon carbide . In the air conditioning sector, copper and aluminum are predominantly used because of their good thermal conductivity . In industrial plants, steel , especially stainless steel , is mainly used because of its durability . Radiators, on the other hand, are now mostly made of sheet steel , previously made of gray cast iron .

Only the types of heat exchangers for liquid and gaseous media are dealt with here:

Recuperators each have a separate room for the two media.

The storable base of regenerators is alternately flowed through by the hot and cold medium. The length of the interval between the reversal of the direction of flow depends on the mass flow of the medium and the heat capacity of the storage mass.

Calculation and evaluation of recuperators

In its basic function, a heat exchanger has two fluids flowing through it in order to bring them to predetermined thermodynamic states. The thermal power emitted by the hot current (index: H) and simultaneously consumed by the cold current (K) is determined using the following energy balance :

The power , depending on the mass flow , the specific heat capacity and the temperature difference between the inlet (index: E) and the outlet (A), corresponds to the energy transported between the two fluids due to heat :

as a dimensionless transport equation.

The key figure indicates the actual performance in relation to the theoretical limit performance (due to the temperature compensation ) of a counterflow heat exchanger. It is therefore a dimensionless quantity with a numerical value between and . The operating characteristic can also be interpreted as a thermal efficiency due to the power ratio.

The operating characteristics can be shown in a diagram as the ordinate over the dimensionless quantity as the abscissa (with the ratio of the heat capacity flows). With an increasing dimensionless heating surface (construction costs due to the surface), the dimensionless output also increases, until the theoretical limit output is reached in the limit case of an infinite heat transfer surface .

The working points of a heat exchanger are in the - diagram on a straight line through the origin with the slope .

This variable finally characterizes the task of the heat exchanger. It is used to convert the quantities for hot and cold electricity.

There are a number of methods for calculating heat exchangers, which differ in terms of computational effort and accuracy. To determine the thermal output, it is usually sufficient to use a mean temperature difference of the entire apparatus that is dependent on the flow control. Heat exchangers with parallel flow guidance are often used in practice. Depending on whether the two material flows move in the same or opposite direction, the following applies: 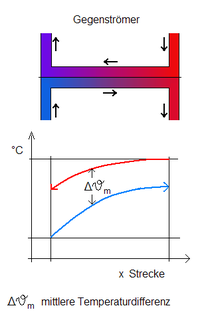 The mean temperature difference with parallel current can also be indicated by the logarithmic mean value (the derivation follows from the relationship if the temperatures are used for the key figures):

Another idealized flow guidance in tube bundle or plate heat exchangers is the cross flow. In the pure cross flow, the two material flows run perpendicular to one another and are not cross-mixed in the direction of flow, compared to the parallel flow.

Here is the faculty of . At given inlet and outlet temperatures on the apparatus side, the countercurrent requires the smallest heat transfer surface, while the direct current represents a very unfavorable current flow in terms of thermal output. With regard to the mean temperature difference, the pure cross flow lies between the values ​​for the counterflow and cocurrent apparatus. Other types of flow:

In addition to the pure form, the cross flow also occurs in connection with parallel flow. Such a circuit is obtained z. B. by combining several plate elements on top of each other. The flow continues to flow through each element, but the main movement of the flows takes place above the height due to repeated diversions. In the case of an opposite flow, there is a countercurrent again in this sense. The mean temperature difference of such a cross-countercurrent circuit is between the values ​​for the countercurrent and the pure crosscurrent.

Each of the areas continues to be purely cross-flow. In cross-flow heat exchangers with several passages, the thermal output depends on the flow of the two fluids over the entire apparatus (main flow direction) and, if applicable, on the degree of cross-mixing within each passage and the areas in between. This creates further variants of the most varied of circuits of multi-pass cross-flow heat exchangers.

Such a circuit is obtained, for example, with tube bundle heat exchangers.

Such a circuit is obtained, for example, in multi-course plate heat exchangers.

With a phase change of a pure fluid (single-component system) in a heat exchanger, the temperature of the fluid in question remains constant. The following applies to the operating characteristics:

The specified value applies to both the evaporation and condensation process .

Both media in gaseous form

One medium is gaseous, one is liquid 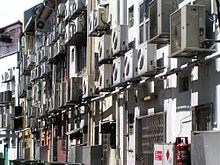 One medium gaseous, one in the phase transition gaseous / liquid

One medium liquid, one in the phase transition gaseous / liquid

Both media are liquid

The following applications are actually not part of the heat exchangers, since the heat is not transferred between two flowing media: geothermal heat exchanger , half-pipe coil , heat sink , radiator .