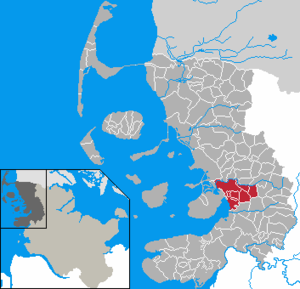 The Office Hattstedt is a former office in the district of North Friesland , Schleswig-Holstein . The administrative seat was in the municipality of Hattstedt .

The Hattstedt office was located north of the North Frisian district town of Husum and extended from the Nordstrand peninsula in the west to the border with the Viöl office in the east. In the north it was bounded by the non-governmental municipality Reußenköge and the office Bredstedt-Land .

In 1948 the district was dissolved and the seven communities formed the parish land community of Hattstedt , which changed the name to Amt Hattstedt in the same year . 1970 came the office with the entire Husum district to the district of North Friesland.

From 2000, the Hattstedt office maintained a partnership with the eastern Polish district of Hajnówka ( Białystok region , Podlaskie Voivodeship ).

As part of the administrative structural reform, the municipality of Schobüll was incorporated into the city of Husum on January 1, 2007 . With effect from 31 December 2007, the Office dissolved and the remaining communities formed with the municipalities of offices Friedrichstadt (excluding the city of Frederick City ), North beach and Treene the Nordsee-Treene .