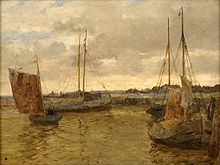 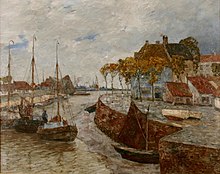 Dirks was born as the eldest son of Paul Andreas Dirks (1835-1914) and Anna Louise Auguste Schaper (1840-1911). He had five younger siblings, two brothers and three sisters. His artistic training began with a visit to the Hamburg trade school . In 1885/1886 he studied with Eugen Dücker at the Düsseldorf Art Academy . From 1887 to 1893 he attended the Grand Ducal Saxon Art School in Weimar , where he studied with Leopold von Kalckreuth and Theodor Hagen . In 1889 he worked with college friends in Gothmund . In 1895 he settled in Düsseldorf. There he belonged to the artists' association Malkasten . Alexander Essfeld was a private student of Dirks . In 1916 Dirk became a professor. Every year he used to visit his home on Sylt, where he had a studio . He also made extensive trips to the United States . Dirks received several awards, in 1900 a small gold medal at the Great Berlin Art Exhibition , in 1907 a large gold medal in Vienna.

Initially preferring earthy tones for his pictures, he switched to a more colorful representation by 1900.