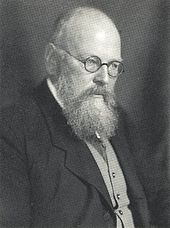 Leopold Karl Walter Graf von Kalckreuth (born May 15, 1855 in Düsseldorf ; † December 1, 1928 at Gut Eddelsen, Hittfeld near Hamburg, today part of Seevetal ) was a German painter , graphic artist and teacher at the Weimar Art School , at the State Academy of the Fine Arts in Karlsruhe and at the Royal Academy of Fine Arts in Stuttgart .

He was a portrait, genre and landscape painter of the naturalistic direction and can be assigned to realism . He was one of the painters who decisively determined painting in the second half of the 19th century and around the turn of the century (Thoma, Leibl, Liebermann, etc.). He was also a medalist . 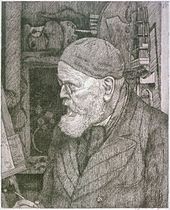 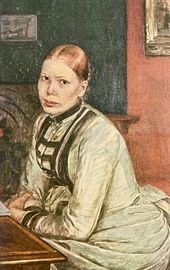 The son of the painter Stanislaus Graf von Kalckreuth and his wife Anna, née Cauer (1829–1881), attended school in Keilhau from 1863 to 1866 . He studied under his father at the art school in Weimar and moved to Munich in 1878 , where he met Franz von Lenbach . From 1885 he worked as an artist and art teacher in Weimar.

In 1895 he came to the State Academy of Fine Arts in Karlsruhe, but sat in opposition to Ferdinand Keller and left Karlsruhe again in 1899, after he was unable to assert himself with Grand Duke Friedrich I of Baden . He also worked in Stuttgart and, from 1906, near Hamburg . There he was a member of the Hamburg Artists' Association from 1832 . With the appointment by King Wilhelm II of Württemberg, Count Leopold von Kalckreuth and his Karlsruhe colleagues Robert Poetzelberger and Carlos Grethe transferred to the Stuttgart Art School, which, under the directorate of Kalckreuths (1900–1905) “by virtue of the highest resolution” of April 23, 1901 the title "Royal Academy of Fine Arts" and thus received university rank. Von Kalckreuth also ensured that the Stuttgart artists received a forum that enabled them to exhibit. After his arrival in Stuttgart, he and six other artists founded the Stuttgarter Künstlerbund eV, which still exists today and is Germany's oldest artist association. In 1903 Kalckreuth was elected the first president of the newly founded German Association of Artists . In 1912 the 4th graphic exhibition of the DKB in Chemnitz was supplemented by a special exhibition in his honor.

In 1908 he was one of the founding members of the Silesian Artists' Union in Breslau . In 1914 he was one of the signatories of the manifesto of the 93 . Since 1926 von Kalckreuth was a member of the Pour le Mérite for science and the arts . In 1927 he was awarded the Bavarian Maximilian Order for Science and Art .

He was one of the preferred selection of contemporary artists that the "Committee for the Procurement and Assessment of Stollwerck Pictures" suggested to the Cologne chocolate producer Ludwig Stollwerck to commission them with drafts.