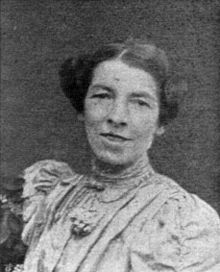 Anna Rust was the daughter of the engineer and saltworks inspector Philipp Anton Rust and his wife, née Barbara Rieder (er). As a result of her father's transfer, she came to Amberg with her family in 1868 at the age of eight . The parents attached particular importance to the linguistic and musical training of their daughters. Lina Rust later became known as a painter in Munich, Agnes Rust became a sculptor in Amberg.

After the death of her father in 1884, she moved to Munich with her mother and her two sisters. In addition to her training as a language and music teacher, she was able to establish contacts with the Schwabing artist and literary scene. This is how she began to write her first works: In 1887 and 1890, Michael Georg Conrad published her first short stories in his monthly Die Gesellschaft, which has been published since 1885 . Your Feierabend was a masterpiece of naturalism praised, but also sharply criticized by other pages. This was followed by other stories and novellas that shed light on the petty-bourgeois-peasant milieu. She was the only woman to be accepted into Conrad's “ Society for Modern Life ”, through which she was also known to Oskar Panizza and had correspondence (around October 1892), and from 1891 she was co-editor of their magazine Modernes Leben . Her wide circle of influence and friends gave her recognition and inspiration.

At the age of 28, she married her childhood sweetheart, the engineer and artillery officer Hermann Croissant, in 1888. Through him she was related by marriage to the writer and dialect poet Eugen Croissant . The couple moved to Ludwigshafen in 1895 , where their husband was entrusted with the management of a gas works. According to her own statements, she found this time in the industrial city oppressive and not at all inspiring. Therefore, after Hermann Croissant's retirement in 1905, they returned to Pasing , where their house again became the focus of the circle of friends. The critics welcomed her new creative period, which lasted from 1906 to 1921, but failed to achieve success with the general public.

Then the writer fell silent. A friend, the writer Hans Brandenburg, described the reason for this in a remarkable portrait of the couple in 1946:

“The poet suffered from the lack of well-deserved success and even more from the agony of creativity: she, who captivated so much droll and superior cheerfulness in words and shapes, had neither pleasure in her writing nor in what she wrote, she not only left all negotiations with the publisher, but also her husband's reading of the corrections, and then after the fiftieth year laid the pen down for good, as if it were really enough of the drudgery now. Of course, she was also plagued by physical pain, neuralgia and gout. But she remained open to all foreign work without envy, and even decades after the death of her partner, she was mentally wide-awake and a hospitable and sociable center into old age. "

Anna Croissant-Rust died at the age of 82 on July 30, 1943 in Munich-Pasing , where she lived in Villa Maria-Eich-Strasse 49 , and was buried in the family grave at the Pasing cemetery.

"Based on the sensational naturalism, she has reached a high level of maturity of form and portrayal in her genuine social empathy and immediate narrative talent."