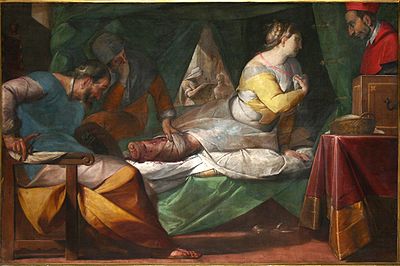 Treatment of bacterial ulcers on the lower leg. (Painting by Giovanni Battista Crespi , 1610)

Bacterial infectious diseases are diseases that can be caused by the penetration and multiplication of bacteria in a host organism if the pathogen has special pathogenic properties ( pathogenicity ) or the host's defense mechanisms are impaired. The interaction between bacteria and host organism determines the occurrence and severity of an infectious disease . As diverse as the group of bacterial pathogens is, the diseases caused in animals and humans are just as numerous and varied. Only a very small part of all known bacterial species are pathogenic to animals or humans. The majority of the bacteria that occur in the environment are non-pathogenic . Bacterial infectious diseases are the leading cause of death worldwide. Since the bacteriological discoveries of the 19th century that bacteria cause a multitude of diseases in humans and animals, the prevention of bacterial infections through hygiene and their treatment with antibiosis has been a central problem in medicine. Up until the development of specific antibacterial therapies and hygiene measures, the "classic" bacterial epidemics such as plague , diphtheria , cholera or typhus were feared as deadly epidemics. Bacterial diarrheal diseases are currently in the foreground in countries with poor hygienic conditions and nosocomial infections with highly resistant bacteria in industrialized countries.

The concept of infection is limited to the invasion and multiplication of the pathogen. As a bacterial infection disease , however, the direct damage of the host is defined by the pathogen and the subsequent defense reactions of the host during an infection. A pathological, self-damaging defense reaction of the host after a bacterial infection, i.e. after the elimination of the pathogen, is not addressed as a bacterial infectious disease, although the cause lies in the original infection. These secondary diseases are called post- or parainfectious syndromes . If the bacterium multiplies but does not penetrate the tissue , as is the case with most bacteria on the skin or in the oral cavity , this is called bacterial colonization . This also applies to bacteria that occur as commensals or symbionts in the gastrointestinal tract as so-called intestinal flora , since the gastrointestinal tract is anatomically viewed as "outside". If harmful bacterial metabolic products ( exotoxins ) get into the host during such a colonization , this is bacterial intoxication .

Interaction between host and bacterial pathogen 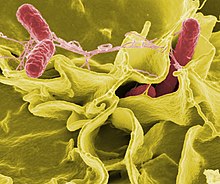 An infectious disease arises from the disease-causing properties of a pathogen and the host's reactions to the pathogen penetrating and multiplying. A pathogen does not always cause a disease, rather the course and symptoms of a bacterial infectious disease are the result of a very complex and dynamic interaction between host and pathogen. In the course of the coevolution of both host organisms, which lasted for millions of years , increasingly specific defense mechanisms, starting with simple phagocytosis of the pathogen (uptake into the cell and destruction through intracellular digestion), mechanical and enzymatic barriers, development of a non-specific defense system with the help of plasma proteins ( complement system ), to towards the specific cellular system of T-lymphocytes and non-cellular (humoral), specific antibodies . The bacterial pathogens, for their part, kept developing new molecular and biochemical mechanisms in order to undermine these individual defense barriers. Due to the very short generation time of bacteria compared to the host organisms (20 minutes to a few hours compared to several years), bacterial pathogens can produce variants much faster and react to new defense mechanisms. These evolutionary mechanisms not only play a role in phylogenetic evolution, but also in the individual host organism in the course of an infection. Such a rapid microevolution of the bacterial population is also a reason for the development of resistance to antibacterial therapies. 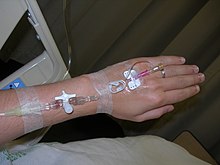 The first steps towards infection are the attachment and entry of the bacterial pathogen into the host organism. Entry is prevented by anatomical barriers such as intact skin , so injuries to the skin, for example from cuts, burns or medical interventions, can become entry points. Skin appendages such as hair follicles , sebum glands or sweat glands are places that already form anatomical depressions in the skin and thus form areas with less resistance ( Locus minoris resistentiae ) and thus represent preferred entry points. The adhesion of bacteria to the surface tissue of the host is very effectively made more difficult by the exfoliation of the uppermost layers (skin, mucous membrane) and by being washed away. The latter is made possible, for example, by correct urine drainage in the ureter , intact tear flow and blinking , sufficient mucus transport through the ciliated epithelium of the trachea or proper bowel movement .

In addition to these unspecific physical barriers, there are also unspecific chemical and enzymatic defense mechanisms against bacteria. The acidic pH value of the gastric juice or the antibacterial urea in the urine are considered chemical barriers . Numerous antimicrobial lipids and peptides prevent the growth of certain bacteria on the skin and mucous membranes or kill them. The so-called β-defensins play an important role here. The enzyme lysozyme is found in various body secretions such as saliva , nasal secretions , tears, sweat , ear wax and breast milk , which can break down cell wall components of bacteria and thereby kill the pathogens.

The specific bacterial infectious diseases can often be recognized by their typical symptoms, courses and organ manifestations, which can be recognized, for example, with imaging methods . This includes, among other things, the X-ray examination of the lungs in the case of bacterial pneumonia or computed tomography in the case of abscesses of internal organs. There are also classic clinical signs that can be observed in the majority of non-specific bacterial infectious diseases. These symptoms include circumscribed, locally limited changes in the course of inflammation , i.e. the so-called cardinal symptoms of inflammation: reddening, local overheating, swelling, pain and impaired function of the affected tissue. With local infections, the appearance of pus is an almost certain indication of a bacterial infection.

In addition to the local, unspecific symptoms, there are also reactions of the entire organism, so-called systemic reactions. In addition to the clinically recognizable signs of fever, an increase in heart rate and a general feeling of illness, these are also clinical-chemical laboratory parameters such as an altered blood count with an increase in the number of leukocytes ( leukocytosis ), an increase in C-reactive protein (CRP) in the blood serum, accelerated Erythrocyte sedimentation and an increase in procalcitonin . In particular, high CRP values ​​are often indicative for the diagnosis of an acute bacterial infection and a differentiation from other infectious diseases or causes of inflammation. As a parameter for the activity of a disease, it serves, among other things, to differentiate between acute and chronic events: In contrast to chronic diseases, acute events cause a greater increase in CRP, which usually corresponds to the extent of the inflammation. The CRP concentration in the serum corresponds to acute bacterial inflammation (40–200 mg / l), serious bacterial inflammation and burns (> 200 mg / l), over 100 mg / l: serious illnesses, bacterial infections, blood poisoning: systemic reaction over a systemic inflammatory response syndrome (SIRS) up to ( sepsis ), bacterial meningitis or pneumonia , complicated inflammation of the pancreas ( pancreatitis ), major operations, severe rheumatic diseases in the active stage, active Crohn's disease , some extensive tumors , severe acute osteomyelitis .

Even with milder inflammatory processes, CRP can increase slightly. CRP is more sensitive to another acute phase protein , procalcitonin . CRP can therefore be used to follow the course of a disease.