Bernd Sturmfels (born March 28, 1962 in Kassel ) is a German mathematician. He has been Director at the Max Planck Institute for Mathematics in the Natural Sciences in Leipzig since 2017 . 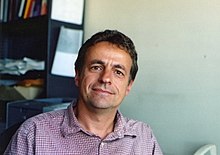 Sturmfels deals with algebraic geometry and commutative algebra , but also with convex optimization and discrete geometry, algebraic statistics and applications in biology. He is considered a proponent of experimental mathematics .

He was in the German National Academic Foundation, Packard and Sloan Research Fellow (1991–1993) and 1992–1997 Young Investigator Fellow of the National Science Foundation. He was George Pólya Lecturer of the Mathematical Association of America (MAA) from 2005–2007 and John von Neumann Lecturer of the Society for Industrial and Applied Mathematics (SIAM) in 2010 , received the Alexander von Humboldt Senior Scientist Prize and in 1999 the Lester Randolph Ford Award . In 2004 he was a Senior Scholar at the Clay Mathematics Institute . He is Vice President of the American Mathematical Society (2009) and its fellow. In 2010 he received the Carl B. Allendorfer Award from the MAA. For 2018 he was awarded the George David Birkhoff Prize . Sturmfels has been Einstein's Visiting Fellow at the Technical University of Berlin since 2015 . In 2018 he was elected to the Berlin-Brandenburg Academy of Sciences .