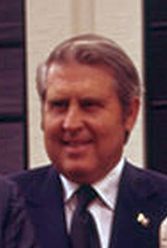 Bill Waller attended the public schools in his home country and then studied at Memphis State University . After completing a law degree at the University of Mississippi , he began working as a lawyer in Jackson. During the Korean War he worked in the US Army intelligence service. Between 1959 and 1967, Waller served as the district attorney in Hinds County . He became a member of the Democratic Party . In 1967 he unsuccessfully applied for his party's nomination for governor. Four years later he made the leap to the highest office in his state. He was able to beat Charles Evers , an independent candidate. Evers, brother of Medgar Evers , was the first African American in Mississippi state history to run for governor.

Bill Waller took up his new office on January 18, 1972. Some administrative reforms were made during his tenure. For example, the office of district sheriff has been upgraded and made more efficient. Under Governor Waller, some Afro-Americans and women were appointed to government offices. It was then that construction work began on the Tennessee-Tombigbee waterway.

After the end of his governorship on January 20, 1976, Waller returned to practice as a lawyer. In 1978 he ran unsuccessfully for a seat in the US Senate . Just as unsuccessful was his renewed candidacy for governor in 1987. Bill Waller had five children with his wife, Carroll Overton.