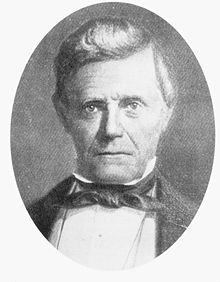 Joseph Matthews attended public schools in his homeland. After moving to Mississippi, he worked as a land surveyor. It was mainly about former Indian land. He also built a large plantation himself. Matthews became a member of the Democratic Party . Between 1840 and 1844 he was a member of the Mississippi House of Representatives , and from 1844 to 1848 he was a member of the State Senate . On November 1, 1847, he was elected as the candidate of his party for governor of his state.

Joseph Matthews took office on January 10, 1848. During his two-year term in office, the state was opened up by telegram. The construction of the railway between Jackson and Brandon were terminated and the laws of the state have been revised. In 1848 the University of Mississippi , founded by his predecessor Albert G. Brown , was opened. There was also a cholera epidemic in 1849 .

Otherwise, Matthews's tenure was relatively uneventful. The aftermath of the economic crisis of 1837 had been overcome and cotton exports went very well; the economy flourished. However, in Mississippi, too, the issue of slavery had to be dealt with more and more . All economic success was based on this questionable institution. Therefore, as in other southern states, it was vehemently defended against the demands of the north for its abolition.

After the end of his governorship, Matthews initially withdrew from politics. In 1860 he was a delegate to the Democratic National Convention . In 1862 he joined the Confederate Army . But he died on the way to the troops in Palmetto, Georgia. Joseph Matthews had five children with his wife, Martha Ann Jones Davis.