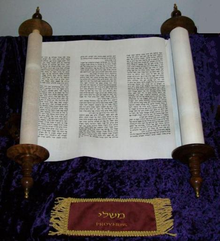 Scroll the Book of Proverbs

The Book of Proverbs ( Book of Proverbs or Proverbs of Solomon , Hebrew מִשְלֵי שְׁלֹמֹה, Mishle [Schelomo] ) is a book of the Tanach and belongs there to the Ketuvim (scriptures), thus to the third part of the Jewish Bible canon . In the Christian Old Testament , it is one of the writings of poetry and wisdom literature that have come before the books of the prophets .

The opening verses of the book are traditionally interpreted as an indication of Solomon's authorship . This assumption also goes back to 1 Kings 5:12, which says that Solomon wrote three thousand proverbs. The book itself mentions in Chap. 30 and 31 other authors of Proverbs ( Agur and Lemuel ). Solomon is specifically named as the author of sections 10.1–22.16 and 25.1–29.27.

According to Jewish tradition, the entire book goes back to Hezekiah , king of Judah ( Babylonian Talmud , Bava Batra 15a).

Current research assumes that the biblical collection of proverbs came into being longer, from the time of King Hezekiah to the fourth, possibly even third, century BC. The oldest parts are probably the third and fourth collections; the first collection is considered the youngest.

There are 35 quotations or references to the Book of Proverbs in the New Testament .

The collection of sayings covers a variety of topics; it comes to general wisdom ( Common sense ), social and family ties and to social justice , which pronounce here: "Open your mouth for the dumb, for the rights of all weak! Open your mouth, judge righteously, give justice to the needy and poor! ”( Prov 31: 8-9  EU ).

Some things are of such timeless validity that a comparable proverb also exists in German. “Whoever digs a pit for another person falls into it” has a similarity, for example, to Prov. 26.27  EU “Whoever digs a pit falls into it himself, whoever rolls up a stone, rolls it back”. With regard to the subject of upbringing and the history of the impact of chastisement , Prov 13:24  EU is important : "Whoever saves the rod hates his son, whoever loves him disciples him early."

The doing-doing-connection can be seen as a kind of "basic law" of wisdom. It is about the "reliability of the world" (Markus Witte), which is expressed in the conviction that good deeds result in good behavior and bad deeds result in bad ones. Unlike Job (Job) and Ecclesiastes (Preacher), the authors of the Book of Proverbs are convinced of the evidence of this connection: "See, the righteous will be rewarded on earth, how much more the wicked and sinner!" (Prov 11:31) God is considered to be the guarantor of this connection: “The Lord does not let the righteous suffer hunger; but he repulses the greed of the wicked. "(Prov 10: 3)

In the face of contrary experiences, however, individual sayings emphasize the unavailability of God's action: “The human heart devises its way; but the Lord alone directs his step. ”(Prov 16: 9)

In the current version of the book, wisdom is interpreted theologically, as the book motto in 1.7 makes clear: "The fear of the Lord is the beginning of knowledge." The personified wisdom is the mediator between God and man (Chapter 1: Wisdom in the role of a prophetess; Chapter 8: Wisdom as a Creator ).