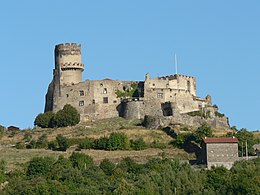 The Burg Tournoël is the ruin of a spur Burg near Volvic in the Auvergne on a rock spur at half the height of a volcanic cone. The facility, which was listed as a historical monument in 1889, offers a good view of the Limagne .

In connection with a Bertrand de Tournoël, the name Tournoël was first mentioned in the 10th century. The documents do not give any information about the castle at that time; possibly it was a wooden watchtower.

Confirmed knowledge about the history of the castle is only available from the beginning of the 13th century. Around 1200 it was owned by Guy II. De la Tour, comte d'Auvergne, a member of the powerful Auvergne count family. The constant arguments with his brother Robert d'Auvergne, the Bishop of Clermont , caused the French King Philip II to attack the fortifications of the region in order to bring them under his control. In 1210, royal troops successfully besieged the castle, which at that time consisted only of a square donjon , and took it. The building was almost completely destroyed.

Tournoël remained in royal possession until Philip II traded it in 1306 with the Maumont family for Châlucet in the Limousin . The Maumonts were owned by the d'Apchon and de la Roche families. In the 14th century, Hugues de la Roche began to rebuild and expand the castle at the same time. In the middle of the 15th century, his descendant Antoine de la Roche renewed the old fortification in the Renaissance style and made it more comfortable. Over time, the castle changed hands several times: the de la Roche were followed by the d'Albon, de Montvallat and de Naucaze families.

Cannon hits severely damaged the complex during the Huguenot Wars . The shield wall that was destroyed in the process was not rebuilt. Still inhabited in the 17th century, the castle fell into disrepair in the 18th century and was given up as a residence in the 19th century. Afterwards, used as a quarry, many architecturally valuable elements of the castle were lost, for example the floor slabs made of lava stone.

When the Chabrol family acquired the ruins in 1920, they hired a guard to prevent further theft of building materials and began conservation work. Since 2000, Tournoël Castle has been owned by Claude and Bernadette Aguttes, who opened it up to tourism as a medieval attraction and are gradually restoring it.

As an anecdote, it should be mentioned that many preschoolers in the area believe that Tournoël is Santa's castle. This belief arises from the association of Tour (tower) and Noël (Christmas).

Castles and chateaux in the Auvergne