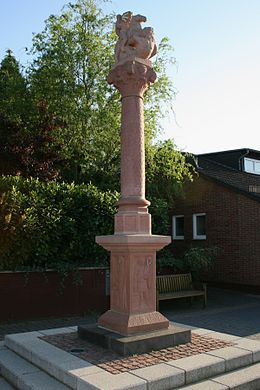 Replica (erected in 2006) of the giant Jupiter column found in Butterstadt, situation in the village in 2008.

Butterstadt is located at an altitude of 154 m above sea ​​level, 2.5 km northeast of Roßdorf .

Excavations show that the first settlements in the Butterstadt area already existed in the Neolithic . From the Roman Empire to the discovery of a is Jupiter column before. A replica of the find is set up on site.

The oldest surviving documentary mention dates back to 850. Butterstadt was initially administered from Roßdorf, as it was owned by the Antoniter branch there. The farms also belonged to the parish of Roßdorf. The Antonites had to transfer the best head to the Seligenstadt monastery since 1288 . The Antonite settlement was moved to the Antonite monastery in Höchst in 1441 .

At the end of the 15th century , Count Philipp I, the younger of Hanau-Münzenberg , bought all of the relics from the Seligenstadt monastery , which was in financial distress . The Archbishop of Mainz objected to this sale and Count Philip I had to return the relics to the monastery. As compensation, he received a number of villages and rights from the Seligenstadt monastery, including Butterstadt.

Butterstadt was mentioned in documents that have survived under the following names (the year of mentioning in brackets):

The name "Butterstadt" is probably not derived from the dairy product. The origin of the name from Wodan cannot be proven . The terms Dorf , Hof or Höfe Butterstadt are used at different times.

In the county of Hanau-Münzenberg, the place was incorporated into the state sovereignty and the Büchertal office. However, the influence of the Antonites apparently remained so great that the Reformation , which was successful in the rest of the county, could not prevail here: Butterstadt remained Roman Catholic . A Roman Catholic church, Saint Boniface, was built from 1866 but was not consecrated until 1867 . The church building is owned by the political community, the city of Bruchköbel.

From 1945 Butterstadt was an independent municipality. On the occasion of the regional reform in Hesse , Butterstadt joined other communities in the Bruchköbel community on December 31, 1971 . Butterstadt is the smallest district with a total of three streets.

On April 28, 1965, the municipality Butterstadt in was district Hanau , Region of Wiesbaden , a coat of arms with the following Blazon awarded: In gold three red rafters covered with a black cross of St. Anthony.

There is a village community center, a fire engine hall and a soccer field.

The well-known Butterstädter Curb has been made smaller and smaller in recent years for reasons of cost. Every year there is the so-called summer lounge on the Butterstadt soccer field.