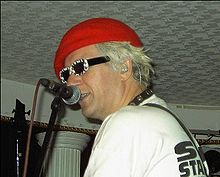 Burns initially played in various bands , e.g. B. at Johnny Moped . In 1976 he joined as bassist for the punk rock - band The Damned , which was founded by Brian James. On the bus ride to the Mont-de-Marsan- Punk Festival in southern France , Sean Tyla (Ducks Deluxe) gave him the pseudonym Captain Sensible. The name stayed.

After a brief breakup of the band and their own projects (King instead of the group Queen , which was favored by Sensible ), The Damned got together again. Sensible wrote the majority of the songs for the album Machine Gun Etiquette , which must be considered a classic of melodic punk rock, and excelled as a guitarist, whereby his fondness for the psychedelia of the early Pink Floyd around Syd Barrett and Jimi Hendrix became evident.

At the same time as The Damned, Sensible started his solo career because he had written songs that the group considered too pop-heavy . He recorded this himself for A&M Records and was immediately successful. With classical pop music, a rebellious and self-confident image and a red beret / beret as a trademark, he landed several hits from 1982 to 1984, which he wrote alone or with Robyn Hitchcock ( Soft Boys ). His debut single Happy Talk was number one in the UK charts for two weeks in July 1982 . His biggest hit in Germany was the rap single Wot , which climbed to number four in the charts in early 1983.

After his contract with A&M Records expired, he released records on his own independent label Deltic Records and on the Henry Rollins label , Humbug Records, in the United States. He also worked a. a. with Martin Newell (Cleaners from Venus) on new songs. In April and May 1996 Sensible went on a major tour of Germany for the first time with The Punk Floyd. Since 1997 he has been a member of The Damned again.

Willem (formerly a pensioner band ) recorded a German cover version of the hit Wot with the title Wat and was also successful in the hit parades. In 2005 the comedians Erkan and Stefan released a cover version of Wot for the film Erkan & Stefan in The Death Comes Krass with Captain Sensible . In 2010 comedian Otto Waalkes sang Watt , a cover version of Wot for the film Otto's Eleven . The Wadden Sea is meant by Watt . For the film tomorrow, you lousies! The Ausbilder Schmidt film covered Ausbilder Schmidt the song in 2009 under the title Drecksack (Wot) . In May 2014 the Bavarian brass band LaBrassBanda took part together with Captain Sensible Say Captain, Say Wot! , a remake of Wot .