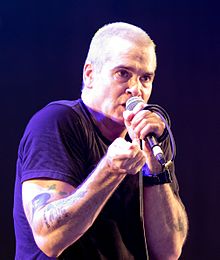 Henry Rollins (* 13 February 1961 as Henry Lawrence Garfield in Washington, DC ) is an American musician , writer and actor . From 1981 he became known to a larger audience through his role as the singer of the US punk band Black Flag . In 1987 he founded the rock band Rollins Band named after him . In addition to his work as a writer additional Rollins is regularly spoken word -Performances on tour . Most of his speech and literature publications appear in his own publishing house on 2.13.61 .

Rollins grew up in Washington, where he attended a preparatory school (a private form of the US high school) in his youth . In the late 1970s, his friend Ian MacKaye introduced him to the local punk scene. He became a member of the band State of Alert , with whom he released an EP before the band split up in 1981.

In the same year he got to know the music of the punk band Black Flag and became a fan. At a performance by the Black Flags in the Peppermint Lounge in New York City, he got the opportunity to appear on a piece as a guest singer. When Black Flag singer Dez Cadena switched to guitar a little later, Rollins was invited to rehearsals and the group's singer. His first album with Black Flag was Damaged in 1981 . He remained a member of the band until they split up in 1986.

With the musicians Chris Haskett (guitar), Bernie Wandel (bass) and Mick Green (drums) Rollins released his first solo album Hot Animal Machine in 1987 , as well as - under the name Henrietta Collins and The Wifebeating Childhaters - the EP Drive by Shooting .

Wandel and Green left the project and were replaced by Andrew Weiss (bass) and Sim Cain (drums). In the new line-up, a split LP , simply titled Henry Rollins Live , was released with the Dutch band Gore . The line-up Rollins, Haskett, Weiss, Cain stayed together and from then on operated as the Rollins Band.

In addition to his own music projects, Rollins founded the publishing house 2.13.61 in 1984. (pronounced "two-thirteen-sixty-one" in English ), named after his date of birth. In addition to his own books and spoken word albums, the works of other musicians and authors appear there. In 1993 he composed and played the song Bottom with the band Tool , which appeared on their album Undertow .

On December 19, 1991, Henry Rollins got together with his best friend Joe Cole (born April 10, 1961), who worked for Black Flag and the Rollins Band as a stage worker, in an armed robbery, in the course of which his companion was killed by a shot in the head has been. After attending a concert by the grunge rock band Hole at the Whiskey a Go Go music club in West Hollywood , Rollins and Cole made their way home. Than they did their apartment in the district of Venice in Los Angeles arrived, demanded two thieves at gunpoint the surrender of cash. However, since Henry Rollins and Joe Cole only carried $ 50 on them, they forced Rollins to go inside and take more money outside. Meanwhile, the two robbers, described as black-skinned and in their mid-twenties, shot the victim Joe Cole in the face, fatally wounding him. Rollins was able to escape through the back exit of the building and alert the police. Rollins was initially suspected of having committed the murder, so the police took him into custody for ten hours. After that, the murder could never be solved. The American noise rock band Sonic Youth processed the story of the murder of Joe Cole in their songs JC and 100% , which are on the 1992 album Dirty .

In the mid-1990s, Rollins first appeared as a video jockey on the music broadcaster MTV and has since appeared regularly on US radio and television. He had his own weekly radio show called Harmony in My Head , which aired from May to December 2004 and again since December 2005 on the local station Indie 103.1 in Los Angeles. In addition, twenty episodes of his television talk show The Henry Rollins Show ran from April 1 to August 26, 2006 on the American broadcaster IFC. Regarding his singing style, Rollins explained in an episode of the German television program Durch die Nacht mit ... , which was first broadcast on the cultural TV channel Arte in July 2006 , in an interview with the artist Shirin Neshat : “ It's just loud and sounds like a machine. It's not artful, but it gets the point across. "(In English:" It's just loud and it sounds like a machine turned on. It's real. It's not artistic but it gets the point across. ")

Rollins also played minor roles in movies such as Lost Highway , The Chase , Johnny Mnemonic , Heat and Bad Boys II and can also be found in the video game Def Jam: Fight for NY . He had his first major role as an actor in the horror film Wrong Turn 2, which was released directly on DVD . In 2012 he was the brutal kidnapper in Gabriel Carrer's thriller In the House of Flies as The Voice in front of the camera. He played his first leading role in 2015 in the social drama He Never Died , in which Rollins' portrays an immortal cannibalistic angel who has walked the earth for centuries.

Henry Rollins lives in Los Angeles , where his publishing house is also located. He is known for his love of tattoos and weightlifting , as well as his strict rejection of nicotine, alcohol and other drugs. In the television program Durch die Nacht mit… on the German TV culture channel Arte, Rollins said in July 2006 that he had only been drunk three times in his life, once as a 17-year-old and only smoked a joint once. 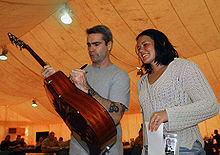 (The band albums can be found in the main Black Flag and Rollins Band articles.)