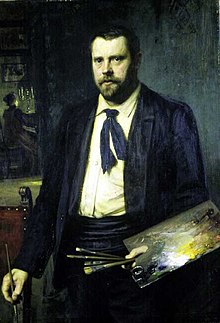 Carl Frithjof Smith was born in Christiania, today's Oslo, in 1859, the son of a furrier. At the age of 18 he started in the drawing office in the Trondheimer mechanical workshops, where he worked as a draftsman for three years and painted in his free time. He received his artistic training from 1880 to 1884 at the Munich Art Academy under Ludwig von Löfftz . In 1890 he was appointed professor at the Weimar Art School , where he worked until the end of 1904. Even after his resignation he kept Weimar as his place of residence; at that time he was already a full member of the German Association of Artists . One of his most famous students in Weimar was Max Beckmann . For his works, Smith received the small gold medal at the Berlin art exhibitions in 1886 and 1891, a medal in Munich in 1888 and the silver state medal in Vienna in 1888. His genre paintings were mainly known in Germany and Sweden, less so in his native Norway, as he was rarely represented at exhibitions there.