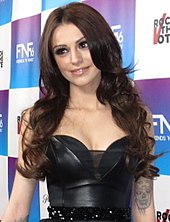 Cher Lloyd (born July 28, 1993 in Malvern , Worcestershire , England ) is a British singer who became known in 2010 through the British TV talent show The X Factor .

After two unsuccessful applications to X Factor in the previous years, Cher Lloyd decided to reinvent herself and her musical style. She then reached the finals of the talent show in 2010, but was only fourth there. After the show ended, she signed a recording deal with SycoMusic.

Her first single, Swagger Jagger , was released in the UK on July 31, 2011, where it immediately hit number one on the charts. The album Sticks + Stones , on which producers such as RedOne worked, was released on November 7, 2011 in the UK. The album also includes numerous collaborations with well-known musicians such as Busta Rhymes , Mike Posner , Ghetts, Mic Righteous and Dot Rotten . Cher Lloyd announced the title With Ur Love , a duet with Mike Posner, as her second single on her Twitter account . The song was released on October 30, 2011 in Great Britain, where it reached number four on the charts.

With the single Want U Back , her success began in the United States, where the song made it to number 12 on the single and even number five on the digital charts. On October 2, 2012, the US version of their album Sticks + Stones was finally released. This also includes the new single Oath , released on the same day , which Lloyd recorded with rapper Becky G and which Dr. Luke was produced.

In April 2013 it was announced that Cher Lloyd is about to finish her second album and that she is planning a collaboration with American R&B singer Ne-Yo . In May 2013, she was a guest star on the television series Big Time Rush . On Demi Lovato's fourth album Demi , Lloyd can be heard in the song Really Don't Care . I Wish is the first single from their new album. The song is a collaboration with the US rapper TI and was released in late August 2013. The release of the album Sorry I'm Late was postponed to early 2014.

The second single from Sorry I'm Late, called Sirens , was released on March 14, 2014. In the run-up to the release, the promo singles Dirty Love and Human were presented on MTV. The Sirens video , released on April 30th, is very personal and shows Lloyd calling the police about her boyfriend who sells drugs. The album has been available since May 27, 2014 and reached number 23 on the Australian charts that same week.

Lloyd grew up with three siblings in Malvern. Through her mother, she descends from the Roma people . On November 18, 2013, she married her fiancé, hairdresser Craig Monk, who was three years older than her.

As a guest musician