Christiane Vulpius drawn by Goethe in 1788/89

Christiane Vulpius spent her childhood in Luthergasse, one of the oldest parts of Weimar. Her paternal ancestors were academics for several generations. On her mother's side, she came from a family of craftsmen. Her father Johann Friedrich Vulpius , official archivist in Weimar, d. H. File copyist, had studied law for a few semesters , but dropped out. His job was poorly paid, the family lived in very difficult circumstances, especially since the father did everything to enable the eldest son Christian August to study. Christiane was forced to take a job as a cleaner in a small Weimar factory at Caroline Bertuch ; it was a subsidiary of Friedrich Justin Bertuch , who was not only active in the publishing business. This was all the more necessary since the father was prematurely discharged from the service because he was charged with an irregularity. However, she was not a worker, but was one of the "unemployed middle-class girls" employed there. Of her six siblings, her brother Christian August later became known as a writer of entertainment novels. 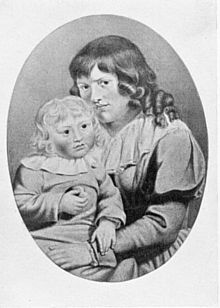 Memorial plaque on the house at Luthergasse 5 in Weimar

Grave in the Jacobsfriedhof in Weimar

Due to various requests for help and applications, Goethe knew the family's situation. On July 13, 1788, he met Christiane Vulpius himself in the park on the Ilm , where she handed him a petition for her brother Christian August. In fact, Goethe later advocated his future brother-in-law several times.

Goethe took the young woman into his house with her half-sister Ernestine and her aunt Juliane; the areas of activity of the two women were completely limited to the house and garden. The Weimar court and society refused the illegitimate and improper connection, so that Goethe, on the advice of the Duke, had to leave the house on Frauenplan in the center of Weimar and temporarily move to the “Jägerhaus” in Marienstrasse. The victory of the Napoleonic troops after the battle of Jena and Auerstedt on October 14, 1806 hit Weimar hard. When the city was sacked by French soldiers, the house at Frauenplan was also threatened: Christiane vigorously opposed the invading soldiers and was able to stop the looting until Goethe had obtained official protection from the French commandant. A few days later, on October 19, 1806, Goethe and Christiane were married in the sacristy of the Jakobskirche.

Even after her marriage, Christiane was only reluctantly and reluctantly accepted by Weimar society as “Goethe's privy councilor”. In order to change the social rejection of his wife, Goethe asked the wealthy widow Johanna Schopenhauer , mother of the philosopher Arthur Schopenhauer , to break the barrier with an official invitation to tea. She did it with the remark: "If Goethe gives her his name, we will probably be able to give her a cup of tea."

Christiane's letters to her husband show a natural and common sense, but also her educational gaps. Joyful, practical and energetic, she took care of the extensive household. For example, after the death of Goethe's mother Mrs. Aja in Frankfurt am Main, she handled inheritance matters. She liked to go to social gatherings, liked to dance and often attended theater performances in Weimar, but also in other places such as. B. Bad Lauchstädt, where the Weimar theater company made guest appearances over the summer. She was also not averse to a harmless flirtation. The correspondence with Goethe shows that he also tolerated the occasional "eyeballing". Christiane possessed aesthetic sensitivity and the ability to differentiate and was sometimes able to advise Goethe. Goethe confessed that he could not and would not continue the theater business in Bad Lauchstädt without her. These were of course pages that remained hidden to many, even close friends. However, it was not entirely hidden from posterity, as can be seen, among other things, in the fact that a bust of Christiane von Goethe made by the Weimar court sculptor Carl Gottlieb Weisser was erected as a bronze copy in the specially built pavilion in the Bad Lauchstädt spa gardens at the end of the 19th century .

With increasing age, Christiane's state of health, who like her husband and their son August, was overly fond of alcohol consumption, fluctuated. In 1815 she suffered a stroke . In the following year, she suffered severe pain and kidney failure . After a week of excruciating suffering, she died on June 6, 1816. The funeral, which Goethe did not attend, took place at the Jacobsfriedhof in Weimar . Her grave was lost for a long time and was only found again in 1888 and given a grave slab. It carries Goethe's farewell verses: "You try, oh sun, in vain, / to shine through the gloomy clouds! / The whole gain of my life / Is to weep for her loss."

Until the middle of the 20th century, Christiane was hardly perceived by Goethe as an independent person. Instead, numerous derogatory remarks by contemporaries and later have come down to us. From 1916 onwards, Hans Gerhard Gräf published the correspondence between the Goethe couple and Etta Federn-Kohlhaas was one of the first to seriously deal with her in her book. In 1949, the Vulpius descendant Wolfgang Vulpius wrote a biography that was expanded in 1957. Sigrid Damm opened up further sources about her life in the context of her biography published in 1997.