This article is about motorcycle racer Craig Jones. For the musician Craig Jones see Slipknot . 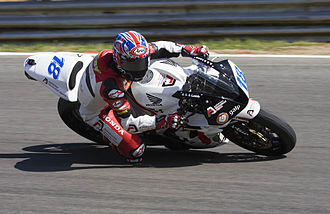 Jones, known as Jonesy , was considered one of the greatest talents in British motorcycling and was known for his spectacular driving style as well as his great commitment on the motorcycle and his friendly character. His favorite starting number was 18.

Craig Jones had a serious accident on August 3, 2008 at the Supersport World Championship run at Brands Hatch and died a few hours later from his injuries.

Craig Jones showed impressive performance in the 1996 national junior mini-moto championship at the age of eleven . He won all eight races in which he started after having secured the pole position beforehand . In 1999 and 2000 he started in the British Super Teens Championship. In 2002 Jones won the British Junior Superstock Championship for the Roundstone Suzuki team , and the following year he competed in the British Supersport Championship for Triumph Valmoto . In 2004 Jones won his first BSS run on the same team and finished eighth in the overall standings. He also made his debut this season in the Supersport World Championship , in which he contested the races at Valencia and Silverstone .

For the 2005 season Craig Jones moved to Northpoint Honda , where he drove a CBR 600 and was one of the championship contenders in the British Supersport series. The Briton achieved seven podium positions and was runner-up behind Leon Camier . Jones competed in three races in the world championship. At Silverstone he qualified for the front row, but had to give up the race due to a problem with the clutch . In the Czech Brno he reached sixth place in Brands Hatch , he was eighth and finished the season by a 17 from.

Because of his achievements, Craig Jones was signed for the 2006 season by the Foggy Petronas team of four-time world champion Carl Fogarty for the Superbike World Championship . The motorcycle used, the Petronas FP1 , equipped with a 900 cc three-cylinder engine, was inferior to the Japanese and Italian competition. The Briton collected only three World Championship points in 24 races and finished the season 27th overall.

In 2007 , Craig Jones contested his first full Supersport World Championship season on a Honda CBR 600 RR from the Revè Ekerold Honda Racing team . He improved continuously over the course of the season and achieved three podium finishes with two second places and one third place as well as a pole position in Vallelunga, Italy . With 94 points, Jones finished the season in fifth place overall.

For the 2008 season, Craig Jones moved to the Parkalgar Racing team , where he again drove a Honda. The Briton achieved three podium places in the first half of the season despite a broken hand in a fall in Monza . It seemed only a matter of time before he would celebrate his first victory. On August 3, 2008, at the ninth round of the season at Brands Hatch, Craig Jones had an accident and died a few hours later from his injuries. In the race, which was canceled because of his fall, Jones was ranked second and thus seventh in the championship.

At the time of the accident on August 3, 2008, the weather conditions at the Brands Hatch race course were unstable. The Supersport World Championship race had to be stopped after eight laps due to rain and was restarted as a rain race a short time later.

On the seventh lap of the second run, Craig Jones was on a partly wet track directly behind the Northern Irishman Jonathan Rea in second place, when the rear wheel of his Honda was in the fast right -hand bend, Clark-Curve , when turning into the start-and-finish straight broke out. Jones, who still tried in vain to intercept the sliding motorcycle, was thrown onto the asphalt and hit in the head by the front wheel of the Australian Andrew Pitt , who was not able to evade. Craig Jones suffered a traumatic brain injury and remained motionless on the slope. The race was then canceled and Jones treated. The Briton had to be resuscitated four times in the route hospital and was then brought to the Royal London Hospital in critical condition . A few hours later, on August 4, 2008 at 12:32 a.m., Craig Jones died of severe head injuries.

In November 2008, a curve of the Autódromo Internacional do Algarve in Portimão, Portugal, was named after Craig Jones. In October 2009, a five-ton monument to him was unveiled at the main entrance to the circuit.