Dahenfeld is a suburb of the city of Neckarsulm ( Heilbronn district , Baden-Württemberg ). The former community was on May 1, 1971 as the village incorporated into the City Neckarsulm. It has 1,371 inhabitants (as of December 31, 2008) and an area of ​​5.11 km² (as of 1996, State Statistical Office) . Like Neckarsulm, Dahenfeld has the postcode 74172 and the telephone code 07139 like Neuenstadt am Kocher.

Dahenfeld was first mentioned in a document in 1177. Pope Alexander III took the Schöntal monastery under its protection that year . The "terram in Tahenvelt" was performed in the monastic possession.

In the 14th century, the Lords of Weinsberg had the right to rule over Dahenfeld, and around 1363 Archbishop Gerlach von Mainz ( Erzstift Mainz ) also acquired rights to the village. Towards the end of the 15th century, the lordly rights of Kurmainz passed to the Teutonic Order .

During the Thirty Years' War from 1618 to 1648, Dahenfeld also suffered from pillage and pillage several times. From April 1635 to spring 1636, a plague epidemic raged in the village, which certainly killed over 100 people.

On August 10, 1735, on Laurentius Day, the figure of Jesus on the crucifix is said to have bled from hands, feet and from the thorn-crowned forehead in the Dahenfeld church . As a result, a pilgrimage to this church began, and miraculous healings and answers to prayer were reported. Since the old church was dilapidated and much too small for this onslaught of pilgrims - on some days over a thousand came - a new, larger church, the " St. Remigius " Church, was built from 1738 to 1748 . The builder was Franz Häffele , who also built the church tower and the town hall in Neckarsulm. A few years later the town hall (1759) and the rectory (1760) were also rebuilt, the latter also by Franz Häffele as master builder.

In 1805 Dahenfeld came to the Kingdom of Württemberg and in 1807 to the newly established Oberamt Neckarsulm , which existed until 1938.

At the end of the 19th century, Dahenfeld had almost 600 inhabitants, who mainly farmed fields, raised cattle, grew fruit and grew a little bit of wine. On May 1, 1971, Dahenfeld, which had been independent until then, was incorporated into Neckarsulm after a vote and a majority vote among the population.

Most of the population works in industry, especially at Audi and KSPG in Neckarsulm. Dahenfeld does have an industrial park, but the number of jobs there has decreased since the 1980s. Although much has been modernized in the place and there is a close connection to Neckarsulm, the village character has largely been preserved.

The election of the local council on June 7, 2009 with a turnout of 66.6% produced the following result:

Schultheißen, Mayor and Mayor (from 1971)

The Dahenfeld coat of arms has shown the patron saint, St. Remigius, since the 19th century . The blazon reads: In red a growing, silver-clad bishop with a silver miter , in his right hand a golden bishop's staff , in his left a blue ointment vessel. 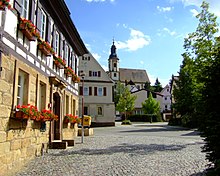 View from the town hall to the church “St. Remigius "

First of all, the Catholic Church of St. Remigius is worth seeing , which was built by Franz Häffele from 1738 , inaugurated in 1748 and renovated several times in the 20th century and which has a richly decorated, baroque interior. The charitable sponsor of the church, the Teutonic Order - Commander Johann Christoph Freiherr von Buseck (1687–1759), is still reminiscent of his coat of arms with an inscription (from 1745) above the gallery. Also worth seeing are the 14  stations of the cross - colored reliefs made of cast zinc - in the cemetery next to the church, which were inaugurated in 1886.

Historically just as important is the old town hall, which was rebuilt from 1758 to 1759. The Remigius Fountain from 1990 is located next to the town hall.

Not far from the town hall is the Dahenfeld bakery. This was built on the basis of a royal general ordinance in 1837 and 1838 and restored to the original in 1999 by the city of Neckarsulm. Traditionally, the baking sequence and the question of which of the two ovens was baked in was determined by means of "Backelose" with special cubes until recently. Even today (2006) around 10 to 14 families still bake their bread in the bakery.

The old half-timbered houses are also worth seeing. The oldest remaining residential buildings include the house Eberstädter Strasse 8, built in 1602, and the half-timbered house in Kreuzstrasse 23 from 1747. The historically valuable house at Kreuzstrasse 23 was dismantled by a specialist company in May 2009 and rebuilt in the Hohenlohe open air museum in Wackershofen . The oldest residential building is likely to be the building on Eberstädter Straße 11, which is said to have been built in 1518/19. Also worth mentioning is the old wine press from 1671 near the St. Remigius Church, which today serves as a ballroom, for example at the Dahenfeld village festival.

There is also a lively club life in the village: the sports club (football, gymnastics, table tennis, cycling), the music and singing club, the tennis club, the motorcycle club “MC Extraprall”, the church choir, the volunteer fire brigade, the Catholic young community and much more other more. Cell 803 - Jugendhaus Dahenfeld - is located in the community and club house on Erlenbacher Straße .

The place has, among other things, a kindergarten (named after Pastor Abele (1903–1982)), a primary school, an administrative office, the multi-purpose hall "Hüttberghalle", sports facilities such as tennis courts and sports fields, grocery store, technical bank branch and two restaurants. The Hüttberghalle represents the cultural center of the village. It was inaugurated in June 1987 and offers around 850 square meters of total usable space for festive events and sports training. The Dahenfeld carnival, the winter celebration of the music and choral society, concerts such as choir evenings and rock concerts and other festive events of the village community traditionally take place here. The hall, which can seat around 430 people, is regularly sold out on such occasions.

Wikisource: Dahenfeld in the description of the Upper Office Neckarsulm from 1881  - sources and full texts