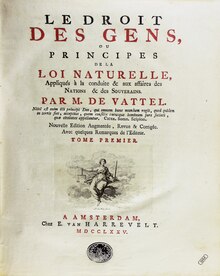 Emer (I) de Vattel (* 25. April 1714 in Couvet ; † 28. December 1767 in Neuchâtel ) was a Neuchatel natural and international law experts and representatives of the western Swiss Natural Law School ( Ecole du droit naturel Romande ). Other spellings of his name are Emmeric de Vattel (Wattl) or Emmerich von Vattel . He may have been a student of Jean-Jacques Burlamaqui . Vattel is best known for his numerous writings on legal philosophy , which shape the understanding of international law today.

Vattel was born in Couvet in 1714 in the Principality of Neuchâtel, which was then still part of Prussia , as the son of the Protestant pastor David de Vattel and his wife Marie de Montmollin. He was one of nine children. As a supporter of Friedrich I, his father was raised to the nobility by him. His mother came from a highly respected family in the Principality of Neuchâtel. Vattel's maternal uncle Emmer de Montmollin was appointed Chancelier d'Etat by Frederick I and entrusted with various diplomatic missions. In 1764 Vattel married Marie-Anne de Chéne, with whom he had a son on January 30, 1765.

After his father accepted a pastorate in Saint-Aubin-Sauges , the young Vattel initially received home schooling. At the age of 17 he passed the entrance examination to study theology in Basel . After the death of his father, he moved to the University of Geneva to study the work of Gottfried Wilhelm Leibniz and Christian Wolff and to attend lectures by Jean-Jacques Burlamaqui . In the context of this, Vattel turned increasingly to questions of law and developed an interest in natural and international law . From 1743 he lived in Dresden, where he became a legation councilor and in 1758 a privy councilor .

Due to the family character of his father and his maternal uncle, Vattel strove for a job in the diplomatic service. In 1742 he traveled to Berlin to ask Friedrich II for a suitable position. During his time in Berlin, Vattel tried several times to establish a university in Neuchâtel. However, Frederick II always refused. Since the latter did not comply with Vattel's request for a diplomatic position either, he traveled to the court of August III in 1743 at the invitation of Heinrich von Brühl . on to Dresden . In 1747 he sent him to Bern as Minister Resident . Since this activity was associated with little work, he spent a lot of time in his hometown Neuchâtel and wrote most of his most famous work Droit des gens, ou principes de la loi naturelle appliqués à la conduite et aux affaires des nations et des souverains . In 1760 Vattel left Switzerland and traveled via Warsaw and Prague back to the Saxon capital Dresden, where he was entrusted with foreign affairs as a privy councilor . In contrast to his previous position, this work was extremely time-consuming and demanded the utmost health from Vattel. He died at the age of only 53 in 1767 during a trip to his native Neuchâtel.

Vattel became known through various writings on legal philosophy. At an early age, for example, he wrote the treatise Defense du systeme leibnitien in order to defend Leibniz's approaches to the criticism of Jean Pierre de Crousaz . Above all, however, his main work Droit des gens, ou principes de la loi naturelle appliqués à la conduite et aux affaires des nations et des sovverains ( Leiden 1758) was already considered a standard work of international law during his lifetime. In it he represented the principles of enlightenment against the politics of the patrimonial state and created the so-called "use and cultivation argument". In this treatise he tried to create a legal basis for dividing the world into colonies. Using the concept of the nation, it brought the reasons of state and the interests of the people back together and raised justice , not sovereignty, to the norm of orientation in state relations.

Emer de Vattel and the School of Natural Law in Western Switzerland made a fundamental contribution to the discussion of natural law and the social and state foundations, thereby influencing human and international law based on natural law and the American constitution ( Virginia Bill of Rights , Declaration of Independence ), which in turn served as a model for the Swiss State became:

America's Founders were inspired by the ideas and values ​​of early Swiss philosophers like Jean-Jacques Burlamaqui and Emer de Vattel, and the 1848 Swiss Constitution was influenced by our own US Constitution. Swiss commitment to democracy is an example for nations and people everywhere who yearn for greater freedoms and human rights. "

“The founding fathers of the United States of America were inspired by the ideas and values ​​that go back to early Swiss philosophers such as Jean-Jacques Burlamaqui and Emer de Vattel. [Conversely] the Swiss constitution of 1848 was influenced by our own US constitution. The Swiss commitment to democracy is an example for nations and peoples around the world who long for more freedoms and human rights. "