The genus Encyclia from the family of the orchid (Orchidaceae) comprises about 120 plant species , which occur in South and Central America. These are perennial , epiphytic or lithophytic plants.

The species of the genus Encyclia grow sympodially , the pseudobulbs stand at short intervals on a creeping rhizome . The roots emerge from the rhizome and are surrounded by a four to eight cell layer thick velamen . The pseudobulbs, which consist of an internode , are round, egg-shaped to cigar-shaped. At its tip there are usually two, more rarely only one or up to four leaves . The leaves are lanceolate and folded along the midrib, leathery to fleshy, rarely with an almost round leaf cross-section.

The mostly paniculate , sometimes racemose , rarely single-flowered inflorescence appears without a flower sheath at the tip of the shoot. The fragrant flowers are resupinated . The color of the sepals and petals is often greenish-brown, more rarely pink to purple. The inner petals are shaped similarly to the outer three. The lip is mostly white or light pink, with dark pink colored veins. The lip is three-lobed, the side lobes are bent upwards and enclose the column . A usually two-row callus extends from the base of the lip to the middle lobe. The lip is free or only fused with the column at the base. This is club-shaped, often winged at the tip - these lip appendages grip the lip at the narrow point between the lateral and middle lobes. The stamen sits at the end of the column and contains four equally large pollinia .

The capsule fruit is spindle-shaped and round in cross-section.

The pollinating insects have not yet been observed, but from the shape of the flower it is concluded that these attract bees without offering nectar.

The known chromosome numbers are 2n = 40. 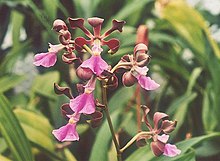 The species of the genus Encyclia are native to almost the entire Neotropic . The northernmost occurrences are in Mexico, all of Central America and the Caribbean are settled, to the south the area extends to southern Brazil, Paraguay and Argentina.

Most species are epiphytes of seasonally dry forests, others are found in ever-humid forests, and some have adapted to almost desert-like conditions. These orchids often grow in sunny, exposed locations, on the branches of deciduous trees or on rocks.

A list of the recognized species can be found in R. Govaerts.

Joseph Dalton Hooker described the genus in 1828 with the type species Encyclia viridiflora - of which, however, no specimen has been found since then. The name of the genus means in ancient Greek εγκύκλιος egkyclios "forming a circle" and refers to the side lobes of the lip that encircle the column.

While John Lindley saw this genus only as a group within Epidendrum , it was separated again by Rudolf Schlechter . The demarcation from the closely related genus Prosthechea has long been unclear. The species known today as Prosthechea were previously all assigned to Encyclia , then separated as a separate genus and later renamed Epithecia , Anacheilium and Hormidium . Recent studies consider the two genera Encyclia and Prosthechea to be different. Species that used to be called the Encyclia Section Euchile are now part of Prosthechea or treated as an independent genus.

A number of smaller genera have been removed from the previously broader genus Encyclia . The genus Psychilis was already described by Rafinesque in 1838 , but the 15 known species were listed under Encyclia until 1988 . Similarly, the genus Dinema has existed since 1831, but the species have long been assigned to Encyclia . Artorima was split off in 1971 to contain the species Artorima erubescens , Hagsatera with two species was set up in 1974. Oestlundia was established in 2001 and comprises four species from Encyclia .