This article is about the Enneagram. This is not to be confused with an engram .

The Enneagram (from ancient Greek ἐννέα, ennea , "nine", and γράμμα , gramma , "the written") designates a nine-pointed esoteric symbol which, as a graphic structure model, is supposed to distinguish, arrange and relate nine fundamentally assumed qualities. This article deals with the model and its application as a type theory to describe different personality structures.

The roots of the enneagram are unknown. Some representatives of the doctrines that use the Enneagram assume an ancient origin, although there are various speculations about the cultural area. It is believed that the Enneagram was passed down from Sufism (Islamic mysticism). Some representatives see parallels to the approaches of the Enneagram , for example in the "main vices" ( deadly sins ) of the desert fathers or the stages of development of Evagrius Ponticus , a Christian mystic of the 4th century. Such parallels can be viewed as preliminary stages of the Enneagram; there is no evidence that it was used as a type system.

The current form of the Enneagram was developed by Georges I. Gurdjieff ; in 1916 he first introduced it to some students, particularly PD Ouspensky . It is also the year of the first recorded use of the word "Enneagram". Gurdjieff found or developed the system on his numerous journeys; more precise sources cannot be reconstructed. Within the framework of the doctrine of the fourth way presented by you, this system links the law of octaves (also known as the law of seven ) with the law of three , the triad . The Enneagram is also described as a process-oriented tool for self-development, but not as a symbolization of different personality types.

The use of the symbol as a personality neagram was first introduced by Oscar Ichazo in the 1960s . Three directions developed in the application of the Enneagram:

The Enneagram symbol is a nine- sided figure inscribed in a circle, which is composed of an equilateral triangle and a hexagonal figure :

The nine corners are numbered clockwise, starting with the top right corner of the hexagonal figure. The sequence of numbers resulting from the lines of the hexagonal figure has a mathematical reference: If you divide a natural number (which itself is not a multiple of 7) by 7, the decimal places always contain the periodic sequence of digits 142857 ( cyclic number of the generator number 7); starting with over or generally for every natural number not divisible by 7

The figurative structure of the Enneagram can be interpreted as follows: The circle stands for the one comprehensive divine nature, also for the essence of life and perfection. The triangle stands for the non- dual , the trinity , thesis / antithesis / synthesis, or creating / destroying / connecting or positive / negative / neutral. In contrast, the hexagon stands for the imperfect, chaotic. But it is also described as the materialization of an idea, an abstract principle ( arab. Wham ).

In addition, other figures can be derived from the Enneagram as sub-symbols, with their equivalents. So z. B. the pentagon that arises from the figure of the inner edge of the hexagonal figure, if the corners five and four are also connected. It can be associated with the five elements .

Between points four and five there is the greatest distance of two adjacent types, which is intended to express the distance between the (male) head and the (female) heart area that meet here.

History of the symbol

The symbol was introduced by Georges I. Gurdjieff in 1916 , but there are reasonable assumptions that Gurdjieff was influenced by Ramon Llull and Athanasius Kircher . Gurdjieff claimed to have discovered the irregular hexagon in the monastery of a Sufi brotherhood in connection with temple dances.

Gurdjieff's symbol was picked up by various authors and developed into the model of psychological-spiritual personality typification known today.

Basics of the personality neagram

In contrast to the four ancient temperaments of choleric , sanguine , melancholic and phlegmatic , the personality neagram is used to divide people into nine personality types.

Experienced Enneagram teachers can also misjudge the types of other people. According to critics, only a few aspects of a person are taken into account and only looked at behavior instead of looking at the overall picture, including their perceptual style and nature.

The focus of attention and the underlying passion (temperament, motivation) should be part of the overall picture. Furthermore:

This should also be reflected externally in body structure and posture. However, conclusions about this require a more complex analysis (e.g. the subtypes etc.).

The Enneagram is not to be understood as a religion and should not serve as a substitute religion or belief. But it can be used as a tool to become aware of your own weaknesses; so it can (in the Christian context) be used as a “ confession mirror ” (Dietrich Koller). The Enneagram is a symbol of repentance (and has nothing to do with the modern striving for "self-discovery").

The most important Enneagram authors of today differentiate between a “false” self or “ ego ” and a “true” (divine) self (Richard Rohr designation: false self / ego and true self; Don Richard Riso speaks of the personality as the “ entrenched ”ego pattern ( ego fixation ), which separates the person from the true being (“ essence ”). The way there is called "transformation".

Riso and Hudson developed since the 1990s a series of more or less extensive tests to determine the Enneagram type; the full version is the Riso – Hudson Enneagram Type Indicator (RHETI), the current version of which consists of 144 decision questions. The test is touted as saying that its reliability has been scientifically and independently proven. A large number of Enneagram type tests are circulating on the Internet.

Overview of the nine types

The modern doctrine of Enneagrams says that every person fits exactly one of these nine type descriptions, and that this basic tone of personality does not change in the course of a lifetime. However, the doctrine also states that the Enneagram can never capture the biographical uniqueness of a person, but only the Enneagram structure.

Most authors prefer to designate the types according to their number ("ones", "twos", etc.), since numbers are neutral. But there are also different and therefore inconsistent names for the types. The names used in the table go back to Helen Palmer.

Basically, all types are equivalent. However, each type can have different stages of development. At one end is the immature (unredeemed, sick) personality. At the other end is the mature (redeemed, healthy) personality, with the normal manifestations of a type in between. In the course of life, a maturation towards a redeemed (healthy) personality can be achieved (integration). Often it remains in the normal state (stagnation) or there is even a relapse into an immature stage (regression, disintegration). The development stages of a type are characterized by different properties (see table). 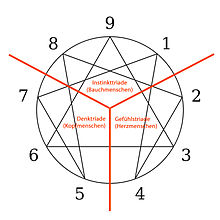 The Enneagram and the Triads

According to the enneagrammatic personality typology, every person has three intelligence centers: head (mind / ratio), heart (emotions) and stomach (instinct).

One of the three intelligence centers should dominate every person. This leads to a division into three areas, each of which comprises three adjacent types in the Enneagram:

The middle types of triads are connected by the equilateral triangle.

The triads describe how or on what level a type perceives the world to a particular degree and thus also how he feels and acts. At the same time, it shows the basic principle of the ego.

An overview of the triads and their dominant body areas as well as life themes:

Each type is further differentiated into three instinct variants (sub-types), the social (or sociable) sub-type, the sexual sub-type, or the self-sustaining sub-type.

Direction of disintegration: If the respective type moves in stressful situations with the arrow to the specified type of the Enneagram, which is also known as his stress point, then he only finds "false comfort" there, which is very harmful for him in the long term.

Each type comprises more or less mature areas (development stages) that can be divided into three parts:

As a parallel, three stages of spiritual growth are also described in Christian mysticism , for example in Euagrios Pontikos . Don Richard Riso found nine levels of development, namely three each for the three areas.

Claudio Naranjo was the first to distinguish the following polarities within the enneagram:

The psychologist Colin Goldner does not attribute any cognitive value to the Enneagram typology; at best it could be used for party entertainment. The theologian Thomas Körbel calls the Enneagram an "example of pareligious spirituality".

The Catholic Church sees in the character analysis an example of Gnosticism , which "stands in decided or even declared contradiction to everything that belongs to the essence of Christianity". The use of character analysis leads to "an ambiguity in the doctrine and life of the Christian faith", as stated in a Vatican document on "New Age". Especially among religious, especially in the USA, the Enneagram is a controversial issue. The United States Bishops' Conference warns against teaching without actively implementing a prohibition. However, it is also used or taught by Christian ministers, often ecumenically.

Since 1989 there has been an ecumenical Enneagram working group in Germany, which holds conferences and trainings for Enneagram trainers and which now has over 500 members.

The Evangelical Central Office for Weltanschauung issues was critical of the Enneagram in 2006, while an opinion from 2013 names problems and misinterpretations, but still gives the Enneagram a positive value in pastoral care.

The Enneagram is condemned as an “occult”, “unbiblical” doctrine of redemption by biblical fundamentalist and partly evangelical groups. Evangelicals like Peter Scazzero see it as a helpful tool for balanced personal development.