The Erste Bank Arena is an ice rink in the Austrian capital Vienna . The ice rink is located in the Kagran district , in the Donaustadt , Vienna's 22nd district .

Until it was renamed in 2018, the ice rink was named after the former district chairman (1981 to 1993) Albert Schultz . In addition to ice hockey , the hall is primarily used for public and school ice skating as well as ice stock sports .

The ice rink originally comprised a large ice arena with space for 4,500 spectators, a small ice rink, an open-air ice rink and a bowling alley . In 2011 the facility was rebuilt and expanded. Since then, Hall 1 has held 7,000 spectators. A third ice rink was also built, which can accommodate 1,000 people. While hall 1 is primarily dedicated to ice hockey, public ice skating as well as school and kindergarten ice skating take place in halls 2 and 3. 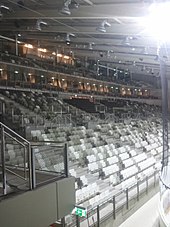 The hall as seen from the north stand during the international match between Austria and Italy on April 18, 2016

The construction of the Erste Bank Arena, at that time still under the name Albert-Schultz-Halle, was decided by the municipality of Vienna in 1989, as a correspondingly modern ice rink was required for the 1996 Group A ice hockey world championship . The project was designed by the two architects Alfred Berger and Sepp Müller. After a construction period of 20 months and production costs of around 20.5 million euros, operations could begin. The facility is owned by the City of Vienna and has been leased and operated by Vienna Capitals since May 1, 2009 . Previously, the operator was Wiener Stadthalle Betriebs- und Veranstaltungsgesellschaft mbH on behalf of Municipal Department 51.

The first ice hockey game was played in January 1995 between the CE Vienna and Kapfenberg. Today the ice arena is home to numerous ice sports clubs , including the ice hockey teams Vienna Capitals , the Vienna Ice Lion Club , Vienna Flyers and the EHV Sabers . The ice rink is also used for public ice skating.

Before the 2006/07 season the boards and goal net were renewed. In contrast to the first one, the new board is made of glass and offers a better view of the ice surface.

In February 2009 the association announced that the hall capacity was to be expanded to 7,000 spectators. The renovation work began after the 2008/09 season and ended with the 2011/12 season. In addition to increasing the capacity, a multi-storey car park was built and new video screens were installed. Above all, the roofing of the free ice area created better conditions for the youngsters. The cost of the renovation is estimated at 30 million euros. Safety requirements and technical issues delayed the renovation, which is why the hall was only completed shortly before the start of the 2011/12 season. The first game in the completely renovated hall took place on August 11, 2011 against Kärpät Oulu as part of the European Trophy 2011 . The Vienna Capitals won 3-2 in the penalty shootout.

The stages Erste Bank Hockey League in the season 2019/20