Füllinsdorf ( Swiss German : Füllschdf [ ˈfʏlʃdəf ]) is a municipality in the district of Liestal in the canton of Basel-Landschaft in Switzerland . 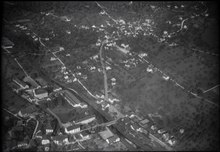 Füllinsdorf essentially consists of two areas: In the plain on both sides of the Ergolz , residential areas with large apartment buildings dominate. Large single-family houses extend up the sunny slope. The medieval castle ruins of Altenberg lie above the village in the forest .

825 it is mentioned in a document that an Uppert transfers a third of his property in Firinisvilla to the St. Gallen monastery . In 1276 the place name was Vilinsdorf. In 1439 the village came to the city of Basel , which assigned it to the Liestal office.

In the 17th century, the industrial settlement Niederschönthal developed from a mill that used the water power of the Ergolz. Today industry has disappeared and a shopping center, old people's home, school and residential complexes have been built in its place.

In 2012, a depot with 293 Celtic silver coins was discovered in Füllinsdorf. It is the largest hoard of Iron Age precious metal coins in Switzerland to date.

Although the place name has nothing to do with the animal name filling , filling was occasionally used as a heraldic animal as early as the 17th century. Since 1946 the coat of arms has consisted of a leaping silver filling with golden hooves and a golden tongue on a blue background.

Political communities in the Liestal district