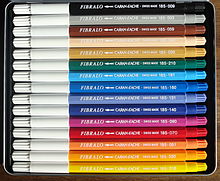 A range of felt-tip pens from Caran d'Ache

A felt-tip pen ( synonyms : felt-tip pen, Filzmaler, felt-tip pen, fiber-tip pens, fiber-tip pens, wick Reiber, colloquially : felter) is a writing or drawing instrument , which as the core of one of polyester fiber or other fiber material existing mine includes that by filling with ink impregnated uniformly with this becomes. The felt pen is originally from Japan .

The mine is surrounded by a mostly colored cover in the same color as the filler, which is equipped with a cap to protect it from drying out.

At the end, a differently shaped writing, drawing or painting tip transports the writing fluid from the core to the surface to be written on or painted on. In the past, this tip was mostly made of felt . Today, tips made of plastic with defined capillaries are mostly used. In principle, felt-tip pens are refillable.

Solvent-based felt-tip pens are particularly affected by the problem of drying out during transport to the consumer. As a solution, felt-tip pens with unimpregnated tips were initially developed. Before such pens were used for the first time, the consumer had to push through an internal membrane by applying force to the stable tip in order to allow the ink to soak the tip.

The American Sidney Rosenthal invented the felt-tip pen in 1952, which he then called "Magic Marker". The first fiber pen is the “SignPen” model from Pentel (Japan) from 1962, invented by the Japanese Yukio Horie . 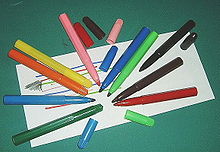 Felt pens for painting and drawing

As a rule, crayons and pens write exclusively on paper. The solvent is based on water or alcohol.

Permanent markers are felt-tip pens with an ink that are used for permanent labeling of objects. The lettering should adhere to as many different surfaces as possible and be insensitive to light, moisture and contact. In addition, the surface should not be changed, in particular not loosened or roughened. However, many permanent markers are not lightfast or penetrate deep into plastic materials. Permanent markers used to contain xylene and / or toluene as solvents. Both are pollutants, so there are now permanent markers that are free of them. Labels can often be with alcohol ( alcohol removed).

As a highlighter , marker pen , marker (from the term marker [pen] , actually, felt tip pen '), highlighter or light pen are called markers, which can be used to highlight text passages in color. As early as 1963, the American company Carter's Ink Company developed fluorescent felt-tip pens. Felt pens with fluorescent ink were first developed in Germany by Günter Schwanhäußer from Schwan-Stabilo in 1971 and put on the market.

After the introduction of the felt-tip pen, which was designed as a crayon for children, it turned out that it was also often used in offices for marking text. To make handling easier, the highlighter was developed with a wider, wedge-shaped tip and a much more compact shape. Transparent fluorescent dyes are used for these pens so that the desired text part is highlighted but not covered. Yellow marks are not visible on black and white photocopies. The other colors of the highlighters appear gray and make the marked parts of the text less legible.

Highlighters are available in different colors. The most common are neon colors , but other colors, often in the range, are also offered for text marking.

Foil pens are pens that stick to surfaces such as foils (e.g. for overhead projectors ). They are available for permanent lettering (permanent) and can be wiped off with a damp cloth (non-permanent). This means that slides on one page can be reversibly supplemented with text or graphics and reset - for example, fill-in text for repeated use.

A CD marker is a smudge-proof and waterproof pen that was specially developed for writing on CDs and DVDs . It does not attack the surface of the CD. Other waterproof markers can also be used for DVDs without any problems, as these - unlike CDs - not only have a thin layer of lacquer on the label side over the actual data carrier layer, but also a 0.6 mm thick layer of polycarbonate.

Whiteboard markers or board markers are pens that are used to write on whiteboards . The special thing about the writing fluid is that it wets the smooth writing surface, it dries quickly and it can be easily wiped off with a cloth or felt sponge.

Pens for other purposes

See ink eraser . The ink fountain pen writing of a certain type of blue ink can be bleached in the paper and thus largely erased.

There is also a suitable pairing of felt-tip pens and erasers, also in the form of a felt-tip pen.

A line of iodine reagent can be applied with pens from various manufacturers, which remains yellowish on real banknotes, but quickly turns into a blue trace when it reacts with starch in copier paper.

Ink is secreted by a felt-tip pen, which forms an almost completely transparent, possibly slightly yellowish film. For example, on the back of wooden picture frames, it can be used to make lettering that a thief could overlook, but which glow with a clear fluorescent under UV light.

A pen that only transfers water to the adhesive areas of envelopes to be moistened in order to seal them.

Before the copper pipes are soldered, a thin oxide layer can be removed locally by brushing them with a felt pen with an acidic cleaning solution. The product also forms a film that acts as a flux during soldering .

Other brands and manufacturers