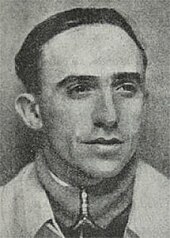 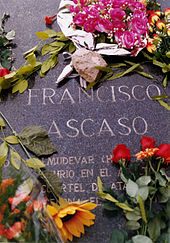 Francisco Ascaso Abadía (born April 1, 1901 in Almudévar , Huesca province , † July 20, 1936 in Barcelona ) was a Spanish anarchist and participant in the civil war, as well as a prominent figure of anarcho-syndicalism in Spain .

Ascaso joined the Confederación Nacional del Trabajo (CNT) and one of its armed groups, Los Justicieros , as a baker and waiter. He went to Barcelona in 1922, where the group became known as Los Solidarios and included well-known people such as Buenaventura Durruti , Juan García Oliver , Antonio Ortiz and Gregorio Jover . They acted as fighters against criminals hired by businessmen against the unions and raided banks several times.

In 1923, when Miguel Primo de Rivera's dictatorship began, Ascaso fled to France with some comrades . Since the French authorities met them with hostility, he and Durruti went to Latin America , where they assisted Argentine anarchists in violent acts. On their return to France, they were arrested on the grounds that they had planned an attack on Alfonso XIII of Spain while he was still in Paris . Their conviction was prevented due to lack of evidence, but they were expelled and banned from other locations, including Belgium , Germany and Sweden . Ascaso stayed in France and from then on lived underground.

Immediately after the proclamation of the Second Spanish Republic in 1931, he returned to Spain and founded the revolutionary group Nosotros , which was more radical than the Federación Anarquista Ibérica (FAI). He took part in the anarchist revolts that marked the first years of the republic and was arrested in 1932 and deported to Bata on the coast of Río Muni , and later to the Canary Islands . A year later he turned up in Seville , where he was arrested again. In 1934 he became general secretary of the regional CNT.

He died in the Spanish Civil War on the first day of the conflict in Barcelona during the bloody battle for the Atarazanas barracks . Shortly thereafter, a column of the anarchist militia was named after him, the Francisco Ascaso column . He is buried in the municipal cemetery of Barcelona, ​​the Cementiri de Montjuïc .