Frankenmuth is a city in Saginaw County in the US state of Michigan .

In 2012 the population was 4944. The city is located in the Frankenmuth Township , but is politically independent. The " Bronner's Christmas Wonderland ", which claims to be the world's largest Christmas business, is in Frankenmuth. The town is popularly called The Muth or Little Bavaria ("Little Bavaria").

The area was settled in 1845 by immigrants from Franconia , most of whom were born in the Ross Valley . This explains the name of the place. The addition of courage actually means “courage”, only the spelling is different according to the time. The surrounding area was also populated by Franks, which is also reflected in the naming ( Frankenlust , Frankentrost and Frankenhilf). The city was founded by August Friedrich Crämer from Kleinlangheim . 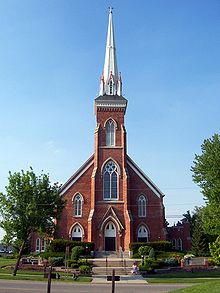 The main source of income is tourism. Frankenmuth has around three million visitors every year who want to see the “Bavarian” shops or restaurants. Best known is Bronner's Christmas Wonderland and the Zehnder’s and Bavarian Inn restaurants . Frankenmuth also attracts tourists with its folk festivals.

Most of the houses in the city are built in the Franconian style. In addition, the streets were signposted based on the German model. The Silent Night Chapel is a curiosity: It is a true-to-original copy of the chapel of the same name in the town of Oberndorf in the Salzburg region ( Austria ).