Kleinlangheim is a market in the Lower Franconian district of Kitzingen and a member of the Großlangheim administrative community .

Kleinlangheim is located between the towns of Kitzingen and Wiesentheid and between the Maindreieck and Steigerwald . The landscape there is slightly mountainous. Five kilometers to the south, the Schwanberg juts out about 200 meters from the plain, seven kilometers east of the Friedrichsberg . The Gründleinsbach runs through Kleinlangheim .

In terms of nature, Kleinlangheim and its districts are located in two natural areas, both of which are part of the Steigerwald foreland. The north with Haidt and Atzhausen is part of the flat Albertshofener drifting sand area , while around the main town Kleinlangheim the areas of the Mainbernheim plain begin with several hills.

The first human traces emerged from the discovery of a nephrite ax from around 7000 BC. Chr. On. It is the oldest man-made find in the Kleinlangheim district and is exhibited in the museum in Kitzingen. Around 1000 years BC The first barrows were created in the Kleinlangheimer Flur. About 500 years later, people left a millstone that was found in the area of ​​the town hall.

About 50 BC The continuous settlement history began. Elbe Germans became settled on the east side of the Gründleinbach . During excavations in the 1960s, a fire pit cemetery with over 200 fire pit graves was discovered . The settlers burned their dead and dumped the ashes loose or in urns in small pits. From the migration period a is burial ground known that started with individual burials in the early 6th century and was used until the 7th century. It contains over 243 body graves and another 56 fire pit graves. In addition to the Elbe-Germanic pre-population, the main bearers of this culture were the Franks , who expanded their territory enormously in the 6th century and probably also introduced Christianity.

The place was first mentioned in a document from 816, when "Lanchem" was included in the equipment of the Megingaudshausen monastery in the Steigerwald. In 1427 the place was granted market rights for four markets a year. Three years later, Kleinlangheim was given a village and market structure. At the same time the village was fortified and could only be entered through four gate towers. The margrave granted sheep rights to the place in 1441. The first town hall was probably built in 1484. The ability of existing riflemen to defend themselves can be seen from an invitation to the state treasure shooting in Würzburg in 1490. As early as 1491, the residents were able to enjoy the privilege of holding cattle markets. This privilege was exercised until 1908.

From 1500 the place was in the Franconian Empire . In 1530 Christian Beyer from Kleinlangheim read Luther's theses at the Augsburg Reichstag. Beyer, who had studied in Erfurt, was Martin Luther's councilor in Wittenberg and represented him legally as a lawyer. In the same year, the people of Kleinlangheim switched to the evangelical creed.

In 1532 all of the mills still in existence today existed. There was also a brickworks in the district. The old town hall, rebuilt in 1584, served as the first school. In 1725, the Kleinlangheim Jews received permission to build a synagogue, which was expanded in 1802.

In 1803 the former margravial office came to Bavaria through border adjustments with Prussia and to the Grand Duchy of Würzburg in 1810 . By the treaties of Paris Kleinlangheim fell back to the Kingdom of Bavaria in 1814. In the course of administrative reforms in the Kingdom of Bavaria , today's municipality was created in 1818.

The last livestock market was held in 1908. With the construction of the Kitzingen – Schweinfurt railway line, the farmers now had it easy to transport their cattle to Schweinfurt and sell them there. This made the cattle market in Kleinlangheim, the largest in Franconia , superfluous. At the end of the First World War , Catholics came to Kleinlangheim again. The synagogue was destroyed during the pogroms on November 9, 1938.

Source of the figures without individual reference: Bavarian State Office for Statistics and Data Processing

The market town council (excluding the mayor) has twelve members. The local elections on March 15, 2020 resulted in the following distribution of mandates:

Compared to the term of office from 2014 to 2020, the CSU and citizens' association / free voters remained unchanged; The Atzhausen civic bloc was able to win a mandate that the SPD , which was no longer running, had previously held.

Rathausplatz with access to the fortified church, community center and town hall

Above the door in the portico of today's town hall is the year 1558 as the year of construction. The arcade supported by seven columns was created when the town hall was rebuilt and widened in the 17th century. It served as a market and weighing area as well as a court. Before the construction of the town hall, they met in the gatehouse of the fortified church.

The restored boardroom contains an old cast iron stove from 1717 and two paintings depicting a wedding ladder and a bride and groom. All wear 16th century clothing.

The church was originally surrounded by the cemetery. In the 12th century the church and cemetery were fortified with strong, high walls. Finally, the walling was expanded into a fortified church .

The community of Kleinlangheim and the association are trying to renovate and preserve the remains of the fortified church.

The settlement history of the Elbe Germans from 50 BC. Can be seen from the fire pit cemetery with over 200 fire pits on the east side of the Gründleinbach.

When the Franks settled in what is now Lower Franconia in the 6th century , body burial became common. The dead were placed side by side in the earth on the edge of the settlements so that the head was facing west and the feet facing east. Remnants of such row grave fields , which are widespread throughout the Franconian settlement area, are mostly found in places ending with -heim and point to the Franconian period. Those in Kleinlangheim were discovered during archaeological excavations. With the adoption of the Christian faith at the turn of the 5th to the 6th century, the end of the occupation of the burial ground in the 7th century was connected.

As in the surrounding communities, people in Kleinlangheim were initially buried around the church. After the Reformation , the cemetery was moved to the outskirts in 1577. The cemetery chapel was not built until 1734. The year mentioned and the builder, Christian Friedrich Freiherr von Seckendorff , are recorded in the inscription under the gable of the west portal. The corners of the hall are rounded. There is no choir . On the hipped roof there is a ridge turret with a lantern and a dome.

The memorial on the street side of the chapel commemorates those who died in the world wars.

Kleinlangheim was on the Kitzingen – Schweinfurt branch line , which was closed. 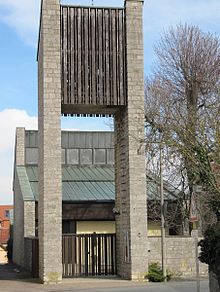 After the Second World War , the number of Catholics soared with the expellees from Silesia and the Sudetenland . Therefore the construction of a separate house of God was planned. Finally, the foundation stone was laid in July 1963 and the inauguration celebrated on June 20, 1964. St. Hedwig was elected as patroness . The saint was brought up in Kitzingen, was later Duchess of Silesia and made the connection to the old homeland.

St. Hedwig welcomes visitors at the entrance. The creator of this work of art is Valentin Lucius Glanzner from Wiesentheid. The altar wall was painted in 1964 by Rudolf Heinisch from Frankfurt.

Similar to the neighboring villages of Feuerbach and Nordheim am Main, there are also legends in Nordheim about the Wild Army, which is said to ride with the storm wind between Christmas and Epiphany.

In Kleinlangheim the legend arose that the leader of the Wild Army, called Herrla Huh, from the dolmens northeast rises in the small Langheimer Gemeindeholz the village. He gathers his army there and pulls over the tops of the trees that break . The wild army is also said to often frighten people and animals. The saying passed down in Kleinlangheim, which is used during thunderstorms: “Kinner, close the shops, then Herrla Huh drives outside”.

Similar to the neighboring Abtswind, there is also a legend in Kleinlangheim about the so-called plague bird.

When the so-called Swedish War struck the village, the plague also came to Kleinlangheim. At that time the place died out except for 48 people. Every day those who remained met in the village square in front of the fountain and counted how many were left. A little bird appeared on the tree next to the well and twittered to the people: "Eat Bibernell , you won't die!" The rest of the people were miraculously spared the plague.

Kleinlangheim is now a wine-growing area in the Franconian wine-growing region . There is a vineyard around the village; the wine has been marketed under the name of Kleinlangheimer Wutschenberg since the 1970s. Kleinlangheim is part of the Schwanberger Land area, until 2017 the winemakers were grouped together in the Steigerwald area. The Keuperböden around Kleinlangheim are just as suitable for growing wine as the location in the Maingau climate zone, which is one of the warmest in Germany.

The people around Kleinlangheim have been growing wine since the early Middle Ages . The Franconian settlers probably brought the vine to the Main in the 7th century. Viticulture in Kleinlangheim was first mentioned in documents in 1455. In the Middle Ages, the region belonged to the largest contiguous wine-growing region in the Holy Roman Empire. The people mostly operated part-time viticulture for self-sufficiency , at the same time export centers were already emerging, especially along the Main.

Viticulture experienced a major decline after secularization at the beginning of the 19th century. Above all, locations with less favorable climatic conditions were completely abandoned. In addition, the emergence of pests such as phylloxera made cultivation difficult . In 1914 the parish chronicle reports that there have been "no grape harvests worth mentioning in any way for 6-7 years (...)". The Franconian wine-growing region was not able to consolidate again until the second half of the 20th century. The use of fertilizers and improved cultivation methods had contributed to this, as had the organization in cooperatives and the land consolidation of the 1970s. The most striking feature of the revitalized viticulture is the Kleinlangheim wine festival in mid-June.

At the end of the 19th century, Kleinlangheim was connected to the Bavarian railway network. In 1893 the Kitzingen- Gerolzhofen section of the so-called Steigerwaldbahn (also Lower Steigerwaldbahn) was completed, and Kleinlangheim was equipped with a stop. The branch line connected from 1903 Kitzingen with the Schweinfurt Hauptbahnhof and was one of the longer branch lines in Germany.

Traffic on the route began to be reduced in the 1980s. In 1981 only passenger buses drove between Gerolzhofen and Kitzingen, freight traffic was given up in mid-2006. For a long time there have been initiatives to reactivate passenger traffic on the disused route. At the beginning of 2019 a fierce dispute broke out over the design of the restart, which has continued to this day, which became a political issue . 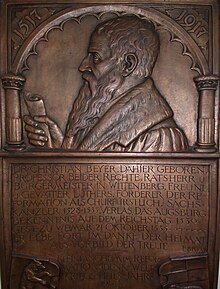 Christian Beyer, epitaph in the Protestant parish church of St. Georg and Maria in Kleinlangheim

Municipalities in the district of Kitzingen

Districts of the market Kleinlangheim