Johann Konrad Wilhelm Löhe (born February 21, 1808 in Fürth ; † January 2, 1872 in Neuendettelsau ) was a German Evangelical Lutheran theologian . Because of the establishment of a mother house for deaconesses, he became known as the Frankish deaconess father . With his writings he contributed to the profile of the Lutheran Church .

Wilhelm Löhe at the age of 25

Wilhelm Löhe monument by Johannes Götz on the church square in Fürth, 2010

Wilhelm Löhe's parents were the businessman Johann Löhe (1764-1816) and Barbara Maria (nee Walthelm, 1770-1853), who married in 1789. This marriage had thirteen children, seven of whom died in childhood. When he was born, he had four older sisters (Anna, Lisette, Barbara Conradina and Dorothea), and his brother Max was born after him. His father died early, the mother raised the child in the spirit of pietism . When he was at school in Nuremberg , Löhe, described as a lonely child, first came into contact with the ideas of the Enlightenment . In 1826 Löhe studied Protestant theology in Erlangen , where he was mainly influenced by Christian Krafft and Karl von Raumer. At first he was a member of the Bubenreuth fraternity , but was soon excluded again because of frequent absences. In Erlangen he got to know Lutheranism through David Hollaz . The most important reading of that time for Löhe was Thomas von Kempens On the Imitation of Christ . It is possible that even then he turned away from the ruling rationalism .

In 1828 Löhe studied a semester in Berlin and attended lectures by Friedrich Schleiermacher and Georg Hegel , among others . However, as he later wrote, both thinkers remained alien to him. In 1829 he returned to Erlangen for family reasons and passed his exam there in 1830. At the ordination in 1831 he felt himself to be a faithful Lutheran .

In the following years Löhe changed as a vicar and parish administrator the multi pastorate . He was in Nuremberg, Behringersdorf , Lauf , Altdorf , Bertholdsdorf and Merkendorf . He mainly dealt with questions of the Lord's Supper and the church constitution and took part in the struggle of the Silesian Old Lutherans against the Prussian Union .

From 1837 he was pastor in Neuendettelsau; He had met his future wife Helene Andreae (1819–1843) beforehand in Nuremberg and married in July 1837. In Neuendettelsau, Löhe worked in the spirit of Neuluthism .

The Three Books of the Church , published in 1845, enlivened the discussion about the nature of the church in the emerging neo-Lutheranism . As early as 1847, Franz Delitzsch from Erlangen published his Four Books on the Church explicitly in relation to the Löhe work. As he writes Delitzsch, Löhe was concerned in his book with "[...] pointing out that spot in the turmoil of the church where the truth bears its most complete testimony " and: "[...] in the confessions of our fathers [we have] [...] found the historical ground again [...] on which we can progress ”. The Lutheran Church, however, is the unifying “center of denominations”.

Löhe turned against unionism in the Evangelical Church; he made a strong distinction between Reformed and Lutheran . One of his biographers, Friedrich Wilhelm Kantzenbach , pointed out misunderstandings. Löhe's ecclesiology, for example, with a demand based on Cyprian , that “everyone who wishes to belong to the invisible church must also belong to the visible church” was not undisputed. Ultimately, Löhe clashed with his understanding of the office, which he saw as the starting point of the congregation, not as its result, and then with some of his students who had emigrated to the USA and with Adolf Harleß, President of the Consistory - but was increasingly involved in the church overall .

As a practical consequence, Löhe attempted to revive the old Lutheran liturgy, re-accentuated the concept of church discipline and often intervened in day-to-day church politics himself (and through his growing number of followers). The self-designation of the Evangelical Church of Bavaria as "Evangelical-Lutheran", which existed from 1853 onwards, is attributed to him (Schumann).

Löhe was the founder of a Lutheran mission at the same time as Theodor Fliedner . Since 1841 missionaries have been trained there for the pastoral care of those who emigrated to North America . In this way he influenced the ecclesiastical character of the New World .

In 1853 the training of women in diakonia was introduced to give women in socially difficult situations an opportunity. Thanks to the deaconesses, regions that were problematic in terms of personnel (especially rural areas) could now be better looked after.

In 1854, a Lutheran association for female diakonia was set up to support it, which was primarily intended to address girls and women who did not want to take the radical step of becoming a deaconess. The Neuendettelsau parent company quickly developed into the spiritual home of those trained there. The Diakonie Neuendettelsau still exists today.

Löhe's approaches - founding an association for an apostolic life or attempting to found an episcopal fraternal church in the Lutheran spirit - could not be implemented in this way. The result of these efforts was the Society for Inner and Outer Mission, which was founded in 1849 and still exists today . The "Society" was founded with the aim of gathering determined Christians and helping them to follow Jesus . Christians should be “core, light, and salt” in the churches based on Scripture and the Lutheran creeds.

When Löhe died in 1872, he left behind an extensive body of work both as a publicist and as a founder of institutions.

In Neuendettelsau a Löhe-Zeit-Museum documents his work. In his birthplace and parents' house in Fürth there is a memorial room with an exhibition on Wilhelm Löhe.

From the founding in 1901 to the expansion of the school building in Rollnerstrasse, the school was officially called: "Higher girls' school of the Evangelical-Lutheran Diakonissenanstalt Neuendettelsau with educational institute in Nuremberg". On February 20, 1932, the school building was inaugurated under the name " Wilhelm-Löhe-Schule ". Primarily one wanted to give the Neuendettelsau deaconesses a sign of thanks with this name. In line with Löhe's wishes, they dared to found the school at the urgent request from Nuremberg. But above all, the school could identify with the ideals, thoughts and ideas of Löhe, especially with his conception of the school and its purpose.

Since 2008, the 200th year of Wilhelm Löhe's birth, the Löhe-Kultur-Stiftung has awarded a medal to people who have made outstanding contributions to his work and his person. 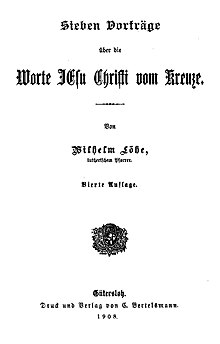 Title page of a publication by Wilhelm Löhe