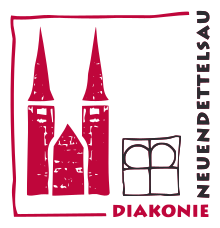 Diakonie Neuendettelsau is the former name of Diakoneo . The public-law corporation founded in 1854 as the Neuendettelsau Deaconess Institution with its headquarters in Neuendettelsau near Nuremberg in Franconia and one of the largest independent diaconal organizations in Germany . She changed her name to Diakoneo on July 1, 2019 .

Representation of the diaconal service

The Diakonie Neuendettelsau was founded on May 9, 1854 by Wilhelm Löhe as a Diakonissenanstalt in the Neuendettelsau community , a town west of Nuremberg in the Ansbach district . It belonged to the social work of the neo-Lutheran revival movement of the 19th century.

Löhe's original intention was to train young women to be nurses and social workers so that they could then take on social tasks in their community. Trained deaconesses were also sent to America . This goal was modified after a short time and a deaconess mother house was created , which served as a residence for deaconesses and pupils and to which a hospital and care for elderly and disabled people was attached. Amalie Rehm became the first matron of the institution .

As a result of secularization at the beginning of the 19th century, the monasteries in Bavaria that had previously carried out the majority of social activities and primary schools were abolished. While the rural population became impoverished in the first half of the 19th century, traditional poor relief had practically failed. Likewise, after the abolition of the monasteries, there were hardly any training opportunities for young girls, and deaconess houses were almost the only institution that offered unmarried women a sphere of activity at that time.

Entry into the deaconess community was not necessarily lifelong in the first few decades, and numerous women left because they got married.

In the 1860s, structures such as old-age and health care for the deaconesses were added, and uniform costumes were introduced. In the 1870s, under Löhe's successor, Friedrich Meyer , the spiritual side of the community was more strongly emphasized. Several branches of the parent company were also established during this time.

From the beginning there had also been male employees, but the Brothers School did not flourish as well as the Diakonissenanstalt in the first few decades. In the 1890s, under Rector Hermann Bezzel, a brothers 'school and a brothers' home for male deacons were founded, the school system was reformed and the new hospital was built in Neuendettelsau.

The plant continued to expand, in addition to the hospitals and old people's homes, a school for teacher training, a secondary school for girls and a social school for women were added at the beginning of the 20th century. In the early 1930s Neuendettelsau had 1,300 deaconesses.

Diakonie Neuendettelsau during the Nazi era

During the time of National Socialism , the schools in Neuendettelsau, like all denominational schools, were closed. In the 1940s, 1,200 people with disabilities from Neuendettelsau were transferred to state killing centers of the so-called " Aktion T4 " as life unworthy of life , and most of them were murdered there. The people with disabilities who remained in Neuendettelsau survived. After initial hesitation, doctors and pastors had handed over the people living in their care. The head rector of the Diakonie Neuendettelsau Lauerer delivered such patients after they were no longer considered as an assistant for housework. The survival of the individual was therefore subject to the decision-making power of the diakonia.

Way into the 21st century

The post-war period was the time of reconstruction and social restructuring, which also influenced developments in Neuendettelsau. As a social institution with a long tradition, which sees itself as an innovative and modern social institution at the same time, the Diakonie Neuendettelsau also played a decisive role in shaping diaconal life in Germany. In addition, new impulses repeatedly came from the Neuendettelsauers, who quickly gained a foothold in social work or in the education sector. For example, the voluntary social year / diaconal year was created in Neuendettelsau in 1954 . There was a shift in the workforce of the Diakonissenanstalt in the 20th century. More and more freelancers, who did not belong to any community, entered the service of the diakonia, so that in 1974 there was an amendment to the statutes. The Diakoniewerk Neuendettelsau became the Diakoniewerk Neuendettelsau.

Today, the Neuendettelsauer, who are an independent legal entity member of the Diakonisches Werk Bayern, are one of the largest diaconal companies in Germany with well over 200 facilities and over 10,000 employees, providing offers and services in the health and social market. It is one of the largest employers in the region. In addition to the headquarters in Neuendettelsau, where an annual festival with a varied program for children and adults is held every year, locations throughout Franconia , Swabia , Baden-Württemberg and other European countries are operated.

In 2017 it was announced that the Diakonie Neuendettelsau with the workshop and the funding facility for people with disabilities will move from Himmelkron to Neuenmarkt, where investments will be made in a modern new building, as the former location, the Himmelkroner Schloss, is not handicapped accessible and is also at risk of flooding.

On January 1, 2018, Diakonie Neuendettelsau took over 75 percent of the shares in Klinik Schwabach .

Diakoneo, the official name of the statutes since 2019, is a corporation under public law.

The Board of Trustees acts as the supervisory body. This in turn appoints a supervisory board that accompanies the operative business as a smaller body.

The business areas include education with almost 40 schools and training facilities, such as the Hof Fachakademie für Sozial- und Heilpädagogik, as well as services for senior citizens with outpatient and inpatient offers at around 20 locations in Franconia , Baden-Württemberg and Poland . There is also the health sector with five clinic locations in Ansbach, Neuendettelsau, Nuremberg, Schwabach and Schwäbisch Hall, as well as the services for over 2,000 people with disabilities in Central and Upper Franconia and Swabia . In addition, around 1,100 children attend the day nurseries, kindergartens and after-school care centers in the Nuremberg Metropolitan Region. The Wilhelm Löhe University in Fürth is one of the founding of the plant and a one hundred percent “subsidiary” . In Neuendettelsau there is also the International DiaLog Academy with a wide range of advanced training courses. The diaconal organization also runs several businesses such as the church workshops for hosting and paramentics as well as the bakery , gardening and butcher's at the headquarters in Neuendettelsau. There is also a three-star hotel there, the DiaLog Hotel Neuendettelsau . Another field of work is the area of asylum and migration .

Already in the first decades of existence the Neuendettelsau set up international projects. The founder Wilhelm Löhe sent deaconesses to North America , the Baltic States , the Black Sea and Bessarabia , today's Moldova , to look after and care for people. For example, as early as 1868/69, people from northern Europe were cared for on the French Riviera coast in Nice , who wintered there or spent their old age there. The diaconal institution sees it as its task to this day to promote the social integration of Europe through practical work and works against this background with many partners across Europe.

After the Diakonissenanstalt was initially housed in the local inn “Zur Sonne” , the new Diakonissenhaus , later called the Mother House, opened in October 1854 as the institutional Diakonie in Neuendettelsau. The four major areas of work that characterize the work of Diakoneo today began in the mother house . There were training and teaching rooms available for the school system, special hospital rooms were set up for nursing training, the elderly and the sick were accepted as well as people with disabilities.

Since the premises were soon too cramped, buildings such as the hospital , today's Clinic Neuendettelsau , orphanage , Magdalenium or the Christophorusheim were realized. This was followed by the establishment of the St. Laurentius institutional church (Neuendettelsau) , the reconstruction of the old prayer room as Paramentik (Neuendettelsau) , the construction of the central school building , today's Löhe campus , the establishment of the St. Christophorus chapel (Neuendettelsau) or the Friedenshort (Neuendettelsau) ) . If the deaconess institution in Neuendettelsau began to build intensively in the 1860s, it was also transferred to the branch locations from the 1890s with the expansion of the services. In the 20th and 21st centuries, elderly care facilities such as the Sigmund-Faber-Heim in Hersbruck , the extension of the Lützelbucher Laurentiushaus in Coburg , various dormitories , support centers and workshops for people with disabilities, kindergartens and technical schools emerged. Furthermore, the expansion of were clinic Hallerwiese in Nuremberg , the senior park at Kreuzberg in Crailsheim , the senior center Rothenburg , the centers of dementia in Nuremberg and Forchheim , or senior residences in the Polish cities of Olsztyn and Gdansk realized. In 2019 the facilities of the former Diakoniewerk Schwäbisch Hall were added, such as the Gottlob-Weißer House or the Diak Clinic in Schwäbisch Hall .

Mother house and rectorate built for the deaconess institution

Diakoneo facilities at the Neuendettelsau headquarters

Wikisource: Wilhelm Löhe: Something from the history of the Diaconissenhaus Neuendettelsau  - sources and full texts