Stohmann, the only son of the owner of a chemical factory near Oeynhausen , was to take over this factory at the father's request. Since he was interested in a comprehensive scientific education, he moved to the University of Göttingen in 1851 , where he joined the Hannovera fraternity . He completed his chemistry studies with Friedrich Wöhler in 1853. He then continued his studies from 1853 to 1855 as Thomas Graham's assistant at University College in London continued and acquired numerous trips a comprehensive knowledge of chemical technology. In 1857 he received his doctorate at the University of Göttingen with the dissertation "The auxiliary fertilizers" on the properties and chemical composition of East Frisian soils. In the same year he became an employee of the agricultural chemist Wilhelm Henneberg , who in the summer of 1857 relocated the laboratory of the “Royal Hanoverian Agricultural Society”, which was built in Celle in 1851, to Göttingen and incorporated it into the newly established agricultural research station Weende. Here in Weende , Stohmann and Wilhelm Henneberg worked out the basics of modern animal nutrition within a few years. Just by introducing the concept of digestible nutrients and their determination in animals, as well as by fixing a uniform analytical method in the later world-famous Weender analysis (Weender methods), he determined the direction of development of animal nutrition up to the present day. His contributions, published in 1860 and 1864, on the justification of rational feeding of ruminants are now among the “classic works” of scientific agricultural literature.

In 1862, Stohmann accepted a call to Braunschweig and founded an agricultural research station. He has published the results of the numerous field tests with new fertilizers that he carried out here in the "Mitheilungen des Verein für Land- und Forstwirthschaft im Herzogthume Braunschweig". In 1865 he accepted an appointment as professor for agricultural chemistry at the University of Halle / S., Where he also took over the establishment and management of the agricultural research station that was moved from Salzmünde to Halle. Here, too, he dealt with fertilization experiments and the analysis of fertilizers , but also carried out experiments on the use of feed materials in farm animals.

Stohmann made one last job change in 1871. He followed a call to the University of Leipzig and founded an agricultural-physiological institute, which he successfully headed for almost 25 years. From then on, the focus of his scientific work was in the field of animal metabolism. Especially with his calorimetric investigations of nutrients and food , he gained a high reputation in the scientific community. Stohmann is the author of several technological manuals, including a. about sugar and starch production . His extensive work on milk and dairy products appeared only a few months after his death.

Stohmann was an honorary member of numerous agricultural associations. The University of Göttingen appointed him an honorary doctorate in medicine in 1887 , in recognition of “the outstanding services he has rendered to physiology, the foundation of medical art, through the extremely precise and careful investigations into the energy balance of the individual for the nutrition of animals and plants Has acquired substances ". In 1891 he became a full member of the mathematical-physical class of the Saxon Academy of Sciences in Leipzig. In 1892 he became a member of the Leopoldina . The Board of Trustees of the Liebig Foundation at the Royal Bavarian Academy of Sciences in Munich awarded him the Golden Liebig Medal in 1896, the highest award in the field of agricultural science at the time. 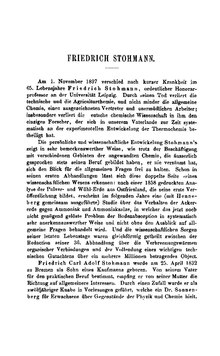