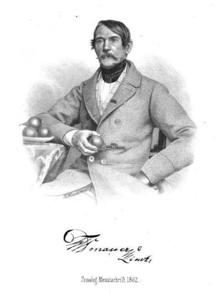 Friedrich Wilhelm Donauer (born October 4, 1788 in Thurnau , † March 5, 1870 in Coburg ) was an imperial and royal lieutenant , forestry specialist and pomologist .

Friedrich Wilhelm Donauer was the son of a councilor and judicial officer from Thurnau near Bayreuth . In 1804 he wanted to join the Prussian Army . At the draft he was told that this would be possible in two years at the earliest. He then attended the forest nursery in Meiningen in the Duchy of Saxony-Meiningen . He left them in 1807 with a good certificate. In the following years he collected in Fichtelgebirge practical experience in forest management . In 1813, at the beginning of the Wars of Liberation , he was to join the Bavarian Army as an officer . But since he preferred to fight against France and not with Bavaria on the French side, he joined the Imperial and Royal Army of Austria in Eger . After the battle of Kulm he was promoted to lieutenant. Among other things, he took part in the siege of Torgau and Hünnigen near Basel. During that time he received a bonus from the Lower Austrian government for solving a forestry problem. In Württemberg he met Joseph Anton von Waldburg-Wolfegg-Waldsee . In 1815 he moved with the army to Italy and back via southern France. In 1820 he moved to Sardinia with the army . Donauer later regretted not having taken the chance to join the Prussian army in 1822. He had met every day at a congress in Verona Wilhelm zu Sayn-Wittgenstein-Hohenstein , who maintained his good relations with Friedrich Wilhelm III. wanted to use for him. But because there were few career opportunities in the military in the early days of peace, Donauer decided to return to the forestry service.

He remained in the service of Joseph Anton von Waldburg-Wolfegg-Waldsee until 1829, before he returned to his home in Upper Franconia. At the same time he began to be active in fruit growing. In 1929 he was a founding member of the Coburg Association for Horticulture and Field Management . He soon found himself in close contact with Johann Georg Dittrich . He soon received an address of thanks from Duke Ernst I and the Duke of Saxony-Ernestine House Order for his work in the Coburg Horticultural Association . As early as 1834, Donauer was of the opinion that the constantly increasing variety descriptions would make it impossible to determine a variety with certainty. The appearance of the fruits and trees depends too much on the soil, climate and weather conditions for conclusions to be drawn about an entire species from the description of a tree. Nonetheless, Donauer tried to standardize the provision on drawings himself. Donauer devoted himself to his fruit tree nurseries for many years, was secretary of the German Pomologists Association , published articles in the monthly pomological journals and sent edible vines to Tilsit. He later devoted himself to beekeeping and founded a beekeeping association in Coburg.

In the last years of his life, Donauer was in poor health. That didn't stop him from sending Edelreiser to the end. He donated a prize that was to be used annually by the Reutlingen Pomological Institute for the institution's best pupil.

The apple variety Donauers Renette as well as the pear varieties Donauers bergamot and Donauers Herbstbutterbirne were discovered by Donauer and named after him. The plum varieties Donauer's compressed plum and Locumbes Incomparable from Donauer are also associated with his name. The Donauers pigeon apple , already described in the Illustrirten Handbuch, later turned out to be synonymous with the red winter pigeon apple .

Part of his estate is in the Regensburg State Library . A portrait of Danube is in the art collection of the Veste Coburg .