GTK (formerly GTK + , GIMP Toolkit ) is a free GUI toolkit under the LGPL . GTK contains many controls that can be used to create graphical user interfaces (GUI) for software.

The library was initially developed by Peter Mattis, Spencer Kimball and Josh MacDonald to create a user interface for the graphics program GIMP apart from Motif . GTK is now used by the desktop environments Gnome , Xfce , LXDE , Cinnamon , Pantheon and Budgie as well as by a large number of other applications and is therefore, alongside Qt , one of the most successful GUI toolkits for the X Window System .

Parts ( versions after 3.2 ) since 2011 seem out of date to be .
Please help to research and insert the missing information .

GTK is written in the C programming language. The first version of GTK + appeared in April 1998. GTK + contained a number of auxiliary routines for solving basic programming tasks, for example for storing various data. These are very time-consuming for the programmer, especially with the repeated development of programs. The first versions of GTK + contained data structures for linked lists , binary trees or "growing" strings. In addition, a system was developed with GTK + to program in C object-oriented . These aids also proved useful for programs without a graphical user interface and were therefore later moved to a separate library, the GLib library of C functions . The object-oriented system has been outsourced to the GObject library, and low-level drawing methods to the GDK library (GTK + Drawing Kit). The latter enables GTK + to run identically across platforms, including Windows , X Window System and macOS .

The GTK + 2 version received new, improved functions for rendering text with the help of the Pango library, a new theme engine, a more flexible API and a new type of library ( ATK ) to improve the accessibility of the toolkit for disabled people, with the Reading software, magnification tools and alternative input devices can be addressed. GTK + 2 is not compatible with GTK + 1, so existing applications had to be ported.

From version 2.8 GTK + uses the vector-based library Cairo , which uses hardware acceleration for rendering whenever possible . GTK + 2.24 is the last version of the 2.x series.

Version 3.0 was released on February 10, 2011. Many functions classified as obsolete have been removed and existing interfaces have been improved. GTK + 3 is not backwards compatible with GTK + 2.x. However, libraries of both versions can be installed in parallel.

GTK + 3.0 contains, among other things, a new interface for drawing widgets, which is now completely based on Cairo , a CSS -based theming engine that also allows animated state transitions, improved layout options, a new slide switch widget , an application class , support for multiple pointing devices (multi-pointers) and symbolic icons that can change their color according to their status. Internal structures have been separated from the public interface and hidden, so that it will be easier in the future to make changes without having to break the interface. Furthermore, several GDK backends are supported simultaneously within the same library. So far, different libraries were necessary for this.

GTK + 3.2 introduced two new backends: one for the Wayland display server and an HTML5 backend called Broadway , with which GTK + applications can be operated remotely in the browser via the network.

GTK + 3.4 supports multi-touch and smooth scrolling and is also available for Windows.

GTK + 3.12 introduces popover. These comic speech bubbles can be used as an aid. Wayland support has been improved.

GTK + 3.18 officially supports Wayland, the successor to the X Window System, as the basis of Gnome 3.18.

GTK + 3.20 integrates the spell check with gspell and improves the CSS theming.

GTK + 3.22 is the last stable version of GTK + 3 and will be maintained as an LTS version for three years. The main features of this version are the new Flatpak portals for simple software installations.

GTK 4.0 is being prepared with the unstable series 3.9x. In March 2017 the Scene Graph Kit (GSK) was added with version 3.90 . It implements a scene graph and takes care of the image synthesis. In February 2019 it was announced that GTK 4.0 will remove the plus sign ("+") from the name.

GTK can be used on macOS via the Quartz backend, a port of the X Window System .

The classic way to program with GTK is to first define the properties of the graphic elements used, then to group them and link them to specific event handlers (one possible event would be the click of a button , for example ). However, there are also graphic design tools for GTK surfaces such as Glade or the Stetic contained in MonoDevelop , which can save you the first two steps, expand GTK with prototyping capabilities and make it possible to make changes to the surface of a program without the Having to change the source code of the software.

The presentation of this program

A typical hello world program that displays the window on the right could look something like this:

First a new window is created in the main routine and its title and the frame distance to the inner elements are set. Then a button with the appropriate label is created and inserted into the window. A window is always also a container , i.e. an element that can contain other control elements ( widgets ).

Which is subsequently destroy - signal , which, for the window widget. B. generated when you click on its "Close" button, linked to the GTK function gtk_main_quit , which terminates the program. The previously created button is also connected to a callback function called on_button_clicked , which is implemented above. For the connection of signals with callback functions, GLib functions are used directly whose name prefix is g_ instead of gtk_ .

Since all controls are initially invisible, they must be made visible, either individually or all together, by calling gtk_widget_show_all . When gtk_main is called, the main event loop is finally started, which waits for events and then distributes them to the corresponding signals.

The function that is executed when the button is clicked exemplarily shows how the calling control element can be accessed by reading the button label and outputting it in the standard output. The program is then ended. The second parameter data of the callback function can contain any data that was specified when connecting. In this example, however, only the value NULL , i.e. nothing, is passed there.

The sample program is gcc gtkhello.c -o gtkhello `pkg-config gtk+-3.0 --cflags --libs`compiled when called from within the folder in which the file is located.

Connections to other programming languages 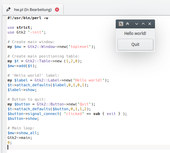 The appearance of the toolkit is largely user-configurable. There are various themes to choose from. 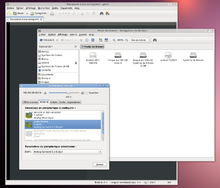 Adwaita has been GTK's new standard topic since mid-2014 .

Environments that use GTK

The desktop environments Gnome , Cinnamon , MATE , Xfce , LXDE , Pantheon from Elementary OS and the ROX desktop are themselves based on GTK, which means that their window managers use GTK when drawing the window elements and the associated programs were developed with GTK.

GTK isn't just limited to these desktops; any GTK program can be run in any other desktop environment, such as KDE or CDE , as long as the GTK libraries are installed on the system. To improve the optical integration in Qt-based desktops (e.g. KDE), there are a. gtk-qt. GTK is also available for Windows and OS X (native / X11), making it possible to write applications that can be ported between Unix, Windows and Mac OS X with relative ease .