This article is still missing the following important information:
Basic data on the research organization (history, structure (organs, composition), source of funds, funding, membership in associations, awards, how the development teams are composed [a few keywords are not very informative], etc.); What has been achieved so far?
Help Wikipedia by researching and pasting it .

The Generation IV International Forum ( GIF ) is a research association dedicated to joint research and development of future nuclear power plants . These power plants of the so-called fourth generation should meet high requirements in terms of safety, sustainability and economic efficiency. The first should be operational from 2030.

The first meetings of the Generation IV International Forum took place in 2000 at the United States Department of Energy . The GIF was founded in May 2001 by the following nine nations:

Switzerland joined the forum in 2002, and the European Atomic Energy Community joined the GIF in 2003 as the eleventh member. China and Russia also became members in 2006, followed by Australia in 2016.

Argentina, Brazil and Great Britain are inactive members, which means that they are not (yet) involved in active development, but benefit from the research and development results.

The generation III and III + nuclear power plants (e.g. the European pressurized water reactor ) are like most of the predecessors of Generation II light water reactors that use enriched uranium as fuel. When the fuel rods are removed from the reactor, they predominantly contain uranium and plutonium that cannot be fissured. Both are materials that could in principle be processed into new fuel elements. The remaining 3% are fission products and higher actinides , which make up the actual radioactive waste. A large part of the possible fuel would be transferred to final disposal , including long-lived transuranium elements . In the case of the direct final disposal of the spent fuel elements, around 50 m³ of high-level radioactive waste are produced in a large nuclear power plant. In the case of reprocessing , there are still around 7 m³ per year, with the operation of the reprocessing plant increasing the volume of low- and intermediate-level waste by a factor of five.

When oil and other fossil fuels run out, it will be necessary to provide proportionally more energy from other sources. Depending on the application, these can be different sources. 4th generation nuclear power plants could also provide process heat for hydrogen production ( sulfuric acid-iodine process ) and for the production of XtL fuels ( coal liquefaction + Fischer-Tropsch synthesis ), and district heating is also conceivable.

The goals for the development of the fourth generation nuclear power plants are therefore:

In December 2002, the so-called Technology Roadmap was published, which describes six reactor types that are regarded as suitable for achieving or meeting the development goals. In order to achieve sustainability, most reactor types are breeder reactors . Each type of reactor is evaluated with regard to its properties, and key research areas are named which must be mastered in order to achieve the operational readiness of the respective type.

Below is an overview of the six reactor types with a brief description. The respective specialist articles can be accessed for details. For each type, there is a brief list of its advantages and disadvantages compared to the other reactor types. 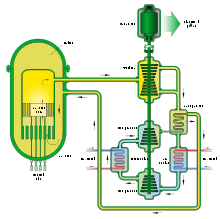 Scheme of a fast gas-cooled reactor

The fast gas-cooled reactor uses fast neutrons to split the fuel and a direct helium circuit to achieve high efficiency. The power density of the core is higher than that of high-temperature reactors. Uranium, thorium or plutonium or mixtures thereof are used as fuel. The fuel is in ceramic form and is therefore very temperature-resistant; fuel elements coated with ceramic are also conceivable. The use of unmoderated neutrons also results in transmutations of transurans , which reduces the amount of nuclear waste. The reactor core is constructed from needle- or plate-shaped fuel assemblies or prismatic blocks. The high core outlet temperature of around> 850 ° C can be used as process heat in the sulfuric acid-iodine process to produce hydrogen or to refine coal ( XtL fuel ).

Scheme of a maximum temperature reactor for hydrogen production

The high-temperature reactor is a concept in which the core is in the form of a prism or ball pile. The balls are made of graphite and have small grains of uranium or thorium ceramic inside, which make up 5% of the ball's mass. The graphite acts as a moderator and protects the fuel from the environment in the reactor. The heap is flushed with gaseous helium to dissipate the heat. The gas has a core outlet temperature of over 1000 ° C and is then expanded directly in a turbine . The low power density of 6 MW / m³ makes the maximum temperature reactor inherently safe; H. a core meltdown cannot take place. With increasing temperature of the reactor is the thermal velocity of the fuel atoms that the probability of neutron capture by increased 238 increases uranium, thereby reducing the reaction rate. Depending on the design, there is therefore a maximum reactor temperature; if this is below the melting point of the reactor material, no core meltdown can take place. To do this, however, it must be ensured that the reactor can passively radiate the heat generated to the outside. The high core outlet temperature can be used as process heat in the sulfuric acid-iodine process to produce hydrogen or to refine coal ( XtL fuel ).

The supercritical light water reactor is a thermal reactor that uses supercritical water as the working medium. The structure corresponds to a boiling water reactor with a simple circuit, but the working medium water is always above the critical point , so there are no phase transitions in the primary circuit . The core temperature is higher than with boiling and pressurized water reactors. The water is fed into the turbine in a simple circuit to generate energy. The supercritical water acts as a moderator, but the neutrons are only partially moderated in order to increase the power density and to enable the transmutation of actinides . The advantage lies in the simple and inexpensive structure of the system and in high efficiency levels (up to 45%). Because of the high pressure in the circuit, the containment is thicker.

Scheme of the fast sodium-cooled reactor

The fast, sodium-cooled reactor is a breeder reactor , which means it can produce more fuel than it consumes. The efficiency is to be increased by breeding plutonium from natural uranium. The reactor works without a moderator; it uses fast neutrons to keep the fission going. If the reactor overheats, the proper motion of uranium atoms, which the probability of neutron capture by increased 238 increased uranium, thereby reducing the rate of cleavage. The reactor is thus protected from a core melt solely by the physical behavior of the fuels it contains, without the need for additional safety devices. Liquid sodium is used to dissipate heat; the core outlet temperature is a maximum of 550 ° C. The reactor core sits in a basin made of liquid sodium. The heat is transferred to a second sodium circuit via a heat exchanger, which serves as protection in the event of leaks, as sodium is very reactive. In the third circuit, water is evaporated to drive a turbo set .

Some SFR have already been in commercial use worldwide (e.g. Phénix 1973–2010, BN reactor 1980 – today), so that most experience was gained with this series. The most important Generation IV SFR project is the Power Reactor Innovative Small Module PRISM from Hitachi and General Electric . The second Generation IV SFR project was the French Advanced Sodium Technological Reactor for Industrial Demonstration (ASTRID) . A decision on the construction of the plant was originally supposed to be made in 2020, and in mid-2019 the press reported that ASTRID will be discontinued. 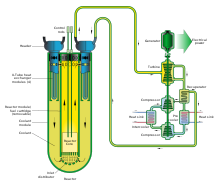 Scheme of a fast lead-cooled reactor

The fast lead-cooled reactor uses fast neutrons and a eutectic lead- bismuth alloy for heat dissipation. The system is also referred to as a “nuclear battery” because it can be operated for decades (15 to 20 years) without being refilled. There are no pumps in the primary circuit; natural convection is used for cooling. The fuel is in metallic form and consists of enriched 235 uranium, MOX and transuranium elements. Due to the long residence time of the fuel elements in the reactor, the probability of nuclear fission per individual atom is increased over time, which means that even particles with a small effective cross-section (measured in barns ) can be split or at least transmute . The core outlet temperature is around 560 ° C, the maximum temperature of the Joule cycle operated with carbon dioxide as the working gas is 400 ° C. The efficiency is about 44%. The lead-bismuth alloy must always be kept liquid, otherwise the reactor would be unusable.

The most important international project of this kind is MYRRHA (Multi-purpose hybrid Research Reactor for High-tech Applications). 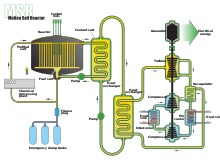 Scheme of a molten salt reactor 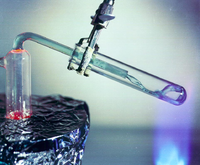 In a molten salt reactor, liquid salt is used as a coolant and fuel carrier. Attempts were made in the 1960s to equip nuclear powered bombers with it. The molten salt reactor has three circuits. In the first, a salt acts as a coolant, for example 2LiF – BeF 2 . The fuel, which is also present as salt, is mixed into the salt. 235 UF 4 and 232 ThF 4 as a 1 to 2 percent admixture come into question here . There are also considerations to use weapons- grade plutonium as fuel 239 PuF 3 , which is produced when nuclear weapons are scrapped. The salt, which is liquid due to the heat, is pumped through a “reactor core” made of graphite. Since graphite acts as a moderator, nuclear fission occurs here , the salt heats up to almost 800 ° C. After leaving the reaction zone, the coolant flows to the first heat exchanger . There, the heat is transferred to a second liquid salt circuit, which circulates without fuel and is intended to prevent contamination in the event of heat exchanger leaks. The heat is then transferred to the third circuit, which drives a turbo set . A water-cooled valve is located under the graphite core, which melts through if the cooling should fail, is switched off or the temperature in the fuel circuit becomes too high. Gravity makes the salt flow in tanks. The tanks are cooled in order to absorb the decay heat (for example, stand in a water basin) and are arranged in such a way that no critical mass of the melt is created.