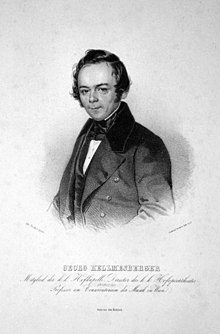 As the son of a former schoolmaster and accountant, Georg Hellmesberger received his first violin lessons from his father. But his musical path led him first to the imperial Konvikt as a choir boy and at the age of 10 - later Franz Schubert - as a soprano in the Vienna court music band .

After attending school in the Cistercian Abbey of Heiligenkreuz, probably intended to study theology, the young Hellmesberger soon decided to become a musician. As a “ dilettante ” he gave his first concert in 1819, but then studied composition with Emanuel Förster and from 1820 violin with Joseph Böhm in the violin class at the Conservatory of the Society of Friends of Music, which had only been established a year earlier . From 1821 Hellmesberger Böhm was already at his side as an assistant professor before he was appointed adjunct professor in 1825 and in 1833 as full professor at this institute.

Invited to his own concerts and to those of other musicians, he soon gained a reputation as “one of the most capable violinists in Vienna”. As the successor to Ignaz Schuppanzigh , he was promoted to concertmaster at the Court Opera Theater in 1830 , a position that he later took on with the Vienna Philharmonic Orchestra , which was founded in 1842 by members of the Court Opera Orchestra . In 1830 Georg Hellmesberger sen. has also already been appointed a member of the court orchestra.

Probably inspired by Schuppanzigh and his own teacher, Joseph Böhm, he was also an avid quartet player and as such had a good reputation. However, with his partners Leopold Jansa , Matthias Durst and Agidius Borzaga, he apparently only appeared at private concerts, which often took place in-house in front of a select audience.

Georg Hellmesberger senior was the conductor. only occasionally engaged as the director of society concerts for music lovers or philharmonic concerts.

He probably made particular merits as a violin teacher, among his most important students were Heinrich Wilhelm Ernst , Joseph Joachim , Miska Hauser , Leopold Auer and his two sons Josef Hellmesberger senior and Georg Hellmesberger junior . With these he undertook art trips to Germany and England in 1847/48.

Retiring as a violin professor in 1867, he was able to receive the decree from his son Joseph, who had been director of the conservatory since 1850. Six years later, Georg Hellmesberger senior died, in a sense as the ancestor of the "Hellmesberger musician dynasty", and as a composer he left behind, among other things, some solo pieces, a trio, a string quartet and two violin concertos.

His grave is in the grave grove of the Währinger Park , where he was transferred in 1923.