Grit Jurack (born October 22, 1977 in Leipzig ) is a former German handball player and record national player of the German handball association. Since March 2015 she has been working as a team manager and co-trainer for the German national women's handball team. 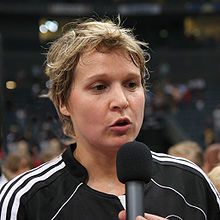 She began her handball career at BSV Schönau Leipzig , where the left-hander played from 1989 to 1993. She played at HC Leipzig until 2001 and won the German championship in 1998 and 1999. From 2001 to 2003 she was loaned to the Danish club Ikast-Bording Elite Håndbold , with whom she won the EHF Cup and the Danish Cup in 2002. She then returned to Leipzig for one season.

In 2004 she finally switched to the Danish top club Viborg HK , where she became the first German player to win the championship title in the Danish Super League and the Champions League in 2006. In the summer of 2012, she had to end her career due to severe cartilage damage in her shoulder.

She made her international debut in the German national team on January 23, 1996 against the USA. She is the record goal scorer and record national player in the DHB selection and the only player to date to have been the top scorer twice at a world championship (1999 and 2007). At the World Handball Championship for Women 2009 in China they could not attend because of her pregnancy. In the international match against Hungary on September 21, 2010 as part of the World Cup (final score 19:22), she came back for the first time after her pregnancy and scored 5 goals. On April 24, 2011, she played her 300th international match at 27:23 against Norway; only three handball players ( Frank-Michael Wahl (344 games), Klaus-Dieter Petersen (340) and Christian Schwarzer (318)) had played that many international matches. In March 2012, she announced her resignation from the national team. On October 7, 2012, she played her farewell game against the Czech Republic.