Gustav Blaeser , 1853, black and white illustration of the painting by Friedrich Keil 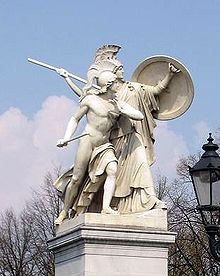 The warrior charging under the protection of Pallas Athenes, Schlossbrücke Berlin

CPW Beuth and WvHumboldt , 1878, in front of the German Institute for Standardization

Gustav Hermann Blaeser (also wind instruments) (born May 9, 1813 in Düsseldorf , † April 20, 1874 in Cannstatt ) was a German sculptor of the 19th century . Blaeser belonged to the smoking school of the Berlin Sculpture School .

Blaeser, older brother of the painter Julius Blaeser , received his training between 1834 and 1843 in the studio of Christian Daniel Rauch in Berlin and at the local Academy of the Arts . Here he was a drawing student of Egidius Mengelberg and Christoph Stephan, who instructed him in wood carving. During the eleven years that he worked at Rauch, he was involved in all of its major works.

In 1844/1845 he went to Rome, from where, however, the order to model one of the eight groups of castle bridges called him back to Berlin.

The group he designed in 1845 represents the moment when the warrior falls out to fight under the protection of Pallas Athenes ; it is described in Meyer's Konversations-Lexikon of 1888 as the most beautiful and most perfect in composition in the series and marks his breakthrough as a recognized artist .

He also provided numerous busts, portrait statuettes, medallions as well as popular genre-like representations; All of these works are characterized by a fresh conception of nature, combined with an antique sense of form.

He is buried in the cemetery of the Dorotheenstadt and Friedrichswerder communities in Berlin-Mitte.