HMS Active (H14) was an A-class destroyer of the British Royal Navy . The destroyer, completed in 1930, was last used primarily for anti-submarine defense during World War II and was involved in the sinking of four submarines. The ship was awarded the Battle Honors "Atlantic 1939-45", "Bismarck 1941" and "Arctic 1941".

The Active was one of three class destroyers to survive the war. In 1947 the destroyer was canceled.

The ship belonged to the Royal Navy's first class of destroyers, built after the end of the First World War . The orders for these ships were placed on March 6, 1928 from the 1927 budget. The Hawthorn Leslie shipyard in Hebburn , Newcastle upon Tyne , which was still inferior in the bid to build the prototypes ( Amazon , Ambuscade ) , received the order for two destroyers. The orders for the other ships went in pairs to three other shipyards, and that for the flotilla leader Codrington to a fourth shipyard. This distribution of an order was maintained up to the I-class , whereby different shipyards were taken into account from year to year.

The keel of the first destroyer to be built by Hawthorn Leslie, hull number 565, was stretched on July 10, 1928. When it was launched on July 9, 1929, the new building was named Active and became the tenth ship of the Royal Navy with this name. The last new build with this name was the scout cruiser Active , which had been in service with the Royal Navy from 1911 to 1920. On February 9, 1930, the new Active was the first of the new A-class destroyers to enter service with the Royal Navy.

The Active initially formed the British "3rd Destroyer Flotilla" together with her sister ships, which was assigned to the Mediterranean Fleet . During this time the ship was commanded by the future Admiral Philip Vian , among others . On April 4, 1932, the Active collided with her sister ship Achates off Saint-Tropez and suffered minor damage. From June 1936 the Active was deployed off the coast of Palestine to prevent outside support for the Arab uprising . After the outbreak of the Spanish Civil War , the Active moved with the flotilla to the western Mediterranean in September 1936 to protect British interests and prevent arms deliveries to the warring parties. On February 16, 1937, the Active collided with the older destroyer Worcester when the Active's steering engine failed at high speed . The damage to the Active was repaired in the naval shipyard in Malta by June 1937. The destroyer came to the "2nd Destroyer Flotilla" ready for action again and remained in service there until October 1938 in the Mediterranean, when it was assigned to the reserve in Malta. In May 1939 the ship was moved to the reserve in Gibraltar .

At the beginning of the war, the Active was activated and assigned to the 13th Flotilla stationed in Gibraltar , which consisted mainly of old V and W class destroyers . One of the main tasks in the first months of the war was to secure convoy trains in this area. In the spring of 1940 there were frequent escort services with French destroyers.

In the summer of 1940, the flotilla was assigned to the newly formed Force H , which was also stationed in Gibraltar. The first task of the new unit was the neutralization of the French Navy in Mers-el-Kébir ( Operation Catapult on July 3, 1940).

In the following year, the destroyer was repeatedly used with the Force H in the Mediterranean . It served as an escort for aircraft carriers , from which fighter planes were flown to Malta , and for convoys , which mostly transported war material for the British troops in North Africa and supplies for Malta.

In May 1941, the ship with the Home Fleet (battleship King George V. and carrier Victorious ) was involved in the search for the German battleship Bismarck ( company Rheinübungen ).
The destroyer was seconded from service in the Home Fleet in mid-August 1941 with the destroyer Impulsive to secure the first British convoy to northern Russia (Operation DERVISH). After returning to Scapa Flow , the destroyer transported personnel from the Royal Air Force to the Soviet Union and accompanied the first convoy to return from Arkhangelsk QP 1 with the Electra .

After a routine overhaul, further missions with the Force H in the Mediterranean followed from January 1942. In mid-February 1942 the destroyer was briefly assigned with other units of Force H to secure the large troop escort WS 16 in the Atlantic, which also comprised troops and ships for the attack on Madagascar , which was ruled by Vichy France . While some of the units went to South Africa with the escort, Active returned to the Mediterranean and was part of the Eagle's security shield for further plane transfers to Malta. In April she joined Troop Escort WS 17 , with whom she transferred to the Indian Ocean via Freetown and South Africa. During the landing operations of allied troops on Madagascar ( Operation Ironclad ) in April / May 1942, the ship was entrusted with escorting the battleships and aircraft carriers used. It succeeded on May 8, together with the destroyer Panther, to sink the French submarine Monge , which had unsuccessfully tried to attack the aircraft carrier Indomitable .

Active was stationed in South Africa for the following months . In September, the destroyer was used again for the final operations off Madagascar and was one of the security forces for the landing near Majunga . On October 8, 1942, the destroyer was alerted near Cape Town by an emergency call from the torpedoed City of Athens and was able to recover its lifeboats with 98 survivors. The destroyer then also discovered the monsoon boat U 179 that had sunk the City of Athens and successfully attacked it. U 179 belonged to the polar bears group that was patrolling there at the time. Three days later the destroyer found a lifeboat 200 nautical miles southwest of Cape Town with 23 survivors of the American freighter Coloradan , which had been sunk by U 159 on October 9 . The search for a second boat was fruitless. This boat reached the South African coast on its own.

From January to mid-May 1943, the destroyer was overhauled and re-armed in Great Britain, in order to then go back to the 13th Flotilla in Gibraltar. Until the end of the war, Active was used to secure convoys in the mid-Atlantic and Mediterranean, especially on the route between Great Britain and Sierra Leone . For this purpose, the anti -submarine and anti-aircraft armament was reinforced at the expense of the main guns and a torpedo tube set. 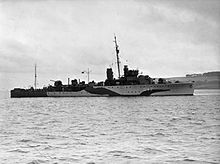 During this time, the destroyer was involved in the sinking of the Italian submarine Leonardo da Vinci west of Cape Finisterre , which was sunk on May 23, 1943 together with the frigate Ness . He achieved another success about six months later on November 2, 1943 with the sinking of U 340 near Tangier . The submarine was discovered and attacked by a Vickers Wellington . The Active pursued the boat with the destroyer Witherington and the sloop Fleetwood and bombed it. The German commander sank his submarine due to considerable damage. The attempt by the Germans to escape on a Spanish fishing boat was prevented by the Fleetwood .

A final overhaul of the Active in Great Britain took place at the turn of 1944/45 . She was then transferred to the "3rd Destroyer Flotilla" in Alexandria and was involved in the internment of the last German troops in the Aegean at the end of the war. After a renewed mission in Gibraltar, the destroyer returned home in September 1945 and was decommissioned. In May 1946 the destroyer Active was removed from the list of active ships and sold for scrapping.