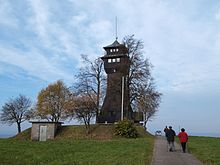 The Hagbergturm is a 23 m high observation tower on the Hagberg ( 585.2  m above sea  level ) in the Welzheimer Forest . He is close to Gschwend in Baden-Württemberg Ostalbkreis . The original tower was inaugurated in 1901, the current one in 1980.

The Hagbergturm stands on the northern edge of the Welzheimer Forest on the summit of the Hagberg, which is 2.4 km (as the crow flies ) west-northwest of the Gschwender core town and 500 m east-southeast of the Gschwender district Horlachen . The mountain is the highest in the Welzheim forest. It towers over its surroundings visible from afar, its summit region is unforested. Immediately south of the tower there is a high water reservoir under a hill-like elevation .

At the current tower location there used to be a surveying scaffold, a remnant of the Württemberg state survey , which could also be climbed for viewing purposes. This gave rise to the idea of ​​building a lookout tower at this point from 1895.

The original Hagberg Tower was inaugurated on September 1, 1901. In 1936 the tower was taken over by the Swabian Alb Association , which still looks after it today. During the Second World War , an observation post of the Luftwaffe was housed in the tower from 1939 . During this time the upper pagoda was torn down. In 1949 the tower was renovated; the re-inauguration took place on October 2, 1949. In 1970 the tower was badly damaged in a storm. In 1973 it had to be closed due to the lack of road safety.

In 1979/80 the tower was rebuilt, the appearance of which comes very close to the original structure, and inaugurated on June 21, 1980. It is 23 m high and built in a closed timber construction on a reinforced concrete foundation. There is a kiosk on the ground floor of the wood-paneled tower, behind which a wooden staircase with a total of 91 steps leads over four intermediate levels to the upper viewing platform . A tower room has been set up next to the staircase on the first floor. The tower is crowned by two pagoda-like essays in Art Nouveau style , in which the two viewing platforms are located on the fourth (15.2 m) and fifth floor (17.8 m). There are three windows on each side of the two platforms, the middle ones of which can be opened to provide a better view.

From the two viewing platforms of the Hagberg tower, the view falls into the Welzheimer forest and the community area of ​​Geschwend. In good visibility conditions, it also extends to Stuttgart in the southwest, Heilbronn in the northwest, Crailsheim in the northeast and Aalen in the east-southeast as well as the Murrhardt Forest with the Löwenstein Mountains beyond it in the west-northwest, to the Mainhardt Forest in the northwest, the Limpurger Mountains in the northeast and the elongated one Swabian Alb in the southeast over south to southwest.

The Hagbergturm is open on Sundays and public holidays from the third Sunday in April to the end of October; On the other days, a key can be picked up for climbing the tower in the hamlet of Wasserhof 300 m east-northeast of the tower .

There is a small parking lot on the western edge of the Gschwender hamlet Sturmhof ; from there you have to walk about 500 m in a north-westerly direction through the Gschwender hamlet Haghof to the Hagbergturm. The tower serves as an exit / passage or destination point for hikes over the Hagberg. Not far south of the tower runs the Main-Neckar-Rhein-Weg , which is part of the main hiking trail 3 (HW 3) of the Swabian Alb Association and on its 9th stage , coming from Horlachen , leads over the Hagberg to Haghof and on to Brandhof .