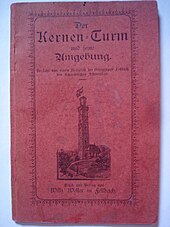 Hiking guide to the Kernenturm around 1900

The core tower is a lookout tower in the Schurwald at 513.2  m above sea level. NN high cores east of Stuttgart , Baden-Württemberg ( Germany ).

The 1896 by the local branch of the Stuttgart Swabian Alp Association established core tower consists of sandstone - Masonry and is 27 m high. It is one of the oldest observation towers in Baden-Württemberg and was built at a cost of 18,000 marks and a construction period of four months.

The square tower has an open platform with historicizing battlements on which a small round tower rises; up a staircase with 158 steps. In 1930 a refuge was built on the east side of the tower, named after the Albverein functionary Anton-Entress-Hütte . There is now a kiosk as well as a rest area, playground and barbecue area.

The design came from the Stuttgart architects Heim and Sipple, the construction work was entrusted to the Mönch brothers.

From the Kernenturm viewing platform , on which there are information boards, the view not only falls on the villages in the Rems Valley, but also extends to Katzenbuckel in the Odenwald, 79 km to the northwest, when the weather is clear . The Löwenstein Mountains can be seen in the north and the Welzheimer Forest behind the Remstal in the northeast . The " Drei Kaiserberge " ( Stuifen , Rechberg and Hohenstaufen ) can be seen in the east, hidden by trees and therefore only visible in winter - without leaves . To the south and southwest you can see as far as the elongated Swabian Alb , in which the Plettenberg ( 1002  m above sea level ) can be seen at a distance of 73 km. To the west, the view falls over the Stuttgart basin and thus over the Neckar Valley and the adjacent mountain ranges and nature parks (e.g. Stromberg-Heuchelberg Nature Park ) to the northern Black Forest .

There is a kiosk at the base of the tower, which is open Thursday through Sunday. Drinks and small dishes are offered.

Panorama from the core tower

Panoramic view from the core tower