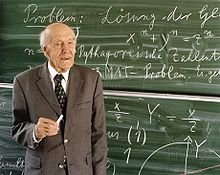 Lenz was born the son of the human geneticist and racial hygienist Fritz Lenz . After graduating from high school and taking part in the Reich Labor Service , he began studying mathematics and physics at the Eberhard Karls University in Tübingen . He became a member of the Association of German Students and interrupted his studies from 1935 to 1937 to do military service. He then continued his studies, first at the Ludwig Maximilians University in Munich , at the Friedrich Wilhelms University in Berlin and finally at the University of Leipzig . In the summer of 1939 he was drafted as a soldier and served on the Western Front after the outbreak of World War II . In the spring of 1941 he passed the state examination for the higher teaching post while on home leave in Leipzig. As a result, Lenz took part in the war in the Soviet Union . Lenz's brother is the human geneticist Widukind Lenz .

Even when he was still at school he had a crush on Hitler and only realized his mistake late, partly disillusioned by the crimes committed by Germans in Eastern Europe and not entirely unknown despite secrecy, in particular the deportations of the Jews, about which he learned from his father. A jaundice illness during a vacation meant that Lenz returned home. There he married Helene Ranke (1920–1994) in 1943, who was close to the Confessing Church . From this marriage came four children, the judge Inge Lenz, the engineer Erich Lenz, the sociologist Ilse Lenz and the lawyer Karl-Friedrich Lenz . From 1943 to 1945 he worked in the high frequency laboratory of the Physikalisch-Technische Reichsanstalt in Berlin and then in Zeulenroda. Here he devoted himself in a subordinate position to the development of the "war important" radar technology.

At the end of the war, his path led him via Heidelberg to Hanover and then to Munich. In his denazification process he was classified as a “fellow traveler”. He first completed his training in Munich and then worked for a good year as a math and physics teacher at the Klenze secondary school. From 1949, Professor Frank Löbell brought him to the chair of geometry at the TH Munich as a scientific assistant . 1951 followed the doctorate with Josef Lense and 1953 the habilitation.

Lenz also began to become politically active and resigned in protest against the rearmament plans in 1953 in the All-German People's Party of Gustav Heinemann , but declined to run for the parliament. In 1954 he switched to the SPD . In 1956 he was one of the founding editors of the papers for German and international politics . In the meantime he continued to work as a private lecturer and in 1959 became an adjunct professor at the TH Munich. In the academic year 1967/68 he was visiting professor at Ohio State University in Columbus, Ohio, USA.

As a result, he got a call to West Berlin, where he became a full professor at the Free University in 1969 . In his first years there he was very busy with academic self-administration and university politics, especially in the faculty council as chairman and in the academic senate, so that he had little time for research (see the list of his work at the end of his autobiography, see p . below). There he experienced the sometimes radical demands of the 1968 students, who often disrupted his lectures, and as a reaction he took on increasingly conservative views.

In 1972 he moved from the SPD to the CDU. The retirement was done against his will in 1981, but was reversed on appeal and its happened for the second time in 1984. Small lectures he held until 2004. From his 60th birthday, organized by the Department of Mathematics at the Free University every five years a colloquium.

Achievements as a mathematician

Lenz is best known for his classification of projective planes , which was later significantly expanded by Adriano Barlotti . In addition, in 1954 he showed how one can define affine spaces axiomatically without resorting to projective spaces or vector spaces . This result is now also known as Lenz's theorem. In the later years he devoted himself mainly to combinatorics in addition to geometry . In addition to his former doctoral student Dieter Jungnickel and his younger colleague Thomas Beth (* 1949; † 2005), he was co-author of the book "Design Theory", which appeared in 1987 (2nd extended edition 1999).

Previously, he wrote a number of other mathematical works: In 1954 he was with the writing "In support of analytical geometry" habilitation . This was followed by the books “Fundamentals of Elementary Mathematics” (1961), “Lectures on Projective Geometry” (1965) and “Non-Euclidean Geometry” (1967). In 1995, Hanfried Lenz was awarded the Euler Medal by the Institute of Combinatorics and its Applications for his achievements .

His autobiography "More Happiness Than Mind" contains a list of his publications.