Harald Quandt in 1944 in the uniform of a Luftwaffe sergeant

Harald Quandt (born November 1, 1921 in Berlin-Charlottenburg ; † September 22, 1967 ) was a German industrialist from the Quandt family . 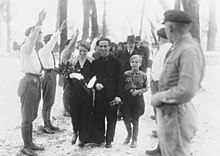 As a 10-year-old (in uniform) at the wedding of his mother with Joseph Goebbels, in the background Adolf Hitler

Harald Quandt was the son of the industrialist Günther Quandt from his marriage to Magda Behrend , who was married to Joseph Goebbels for the second time .

After his parents divorced, Harald Quandt grew up with his mother, who, however, always maintained friendly relations with her ex-husband. In 1940 he volunteered for the paratroopers and took part in the airborne battle of Crete in May 1941 as a member of the parachute pioneer battalion . Quandt fought in the Soviet Union and later in Italy. In the fall of 1943 he was a first lieutenant in the staff of the 1st Paratrooper Division . At the end of December 1943 he took part in the costly fighting in the seven-day battle for Ortona . In February 1944 he was taken to a hospital in Munich due to illness, but his stepfather Joseph Goebbels put him under massive pressure to return to the front as quickly as possible. So he fought soon after, again as a paratrooper in the battle of Monte Cassino in the spring of 1944. In early September 1944 he fell in combat on the Adriatic Sea in the area of Bologna in Italy seriously wounded in British captivity and was in a prison camp (Camp 305) Libyan Brought to the port city of Benghazi . After his release from captivity and his return to Germany in 1947, he studied mechanical engineering at the Technical Universities of Hanover and Stuttgart and became a qualified engineer . As a student he joined the Club Cosmos in Stuttgart, which later became the Academic Association Vitruvia .

With the death of their father in 1954, Harald and his half-brother Herbert Quandt inherited a conglomerate of company holdings, including in Akkumulatoren-Fabrik AG (AFA), later VARTA , and other companies. Harald concentrated on the armaments sector with “ Industriewerke Karlsruhe AG ”, of which he was also chairman of the board. He held other board positions at Busch-Jaeger AG, Dürener Metallwerke AG and Mauserwerke Oberndorf . At VARTA he was chairman of the supervisory board and at Daimler-Benz AG he was a simple member of the supervisory board.

At the end of the 1950s / beginning of the 1960s, the enthusiastic private pilot was honorary president of the German Aero Club , the umbrella organization of German aviation clubs and at the time represented the interests of general aviation . From September 1961, Quandt operated the first civilly registered business travel jet in Germany, a four-seater Morane-Saulnier MS-760B Paris II , German type certification on October 15, 1960 according to the chronicle of the German Federal Aviation Office (LBA) , with the aircraft registration D-INGE . Since 1951, Harald Quandt was married to Inge Quandt-von Halem (née Bandekow, November 18, 1928 - December 24, 1978), the daughter of the company lawyer, with whom he had five daughters: Katarina Geller (* 1951), Gabriele Quandt- Langenscheidt (* 1952), Anette May-Thies (* 1954), Colleen-Bettina Rosenblat-Mo (* 1962) and Patricia Halterman (1967-2005).

Harald Quandt was killed on September 22, 1967 in a plane crash with a "King Air A90" company aircraft on a night flight from Frankfurt am Main to Nice . A substitute pilot was at the wheel, who jumped in at short notice and probably did not yet fully master the machine. Apparently the entire on-board electronics including the radios failed, so that the pilots flew into a mountain near Cuneo ( Italy ). The accident remains a mystery. Harald Quandt's share of assets is now managed by an asset management company that is controlled by his daughters and their descendants. After his death, his wife was initially in a relationship with the television journalist and racing driver Rainer Günzler . In 1976 she married Hans-Hilman von Halem (April 8, 1932 - December 26, 1978).