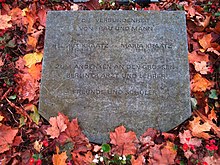 Helmut Kraatz was born on August 6, 1902 in Wittenberg at Schlossstrasse 3. After attending the Wittenberg Middle School and the Wittenberg Melanchthon High School, he began studying medicine in Halle , Berlin and Heidelberg in 1922 . During his studies in 1922 he became a member of the Allemannia Heidelberg fraternity . In 1928 he passed his state examination and was awarded a doctorate. med. at the University of Heidelberg .

He then worked as a medical intern and later as an assistant doctor at the St. Georg Hospital in Hamburg . In 1929 he received his license to practice medicine in Karlsruhe, and he became a ship's doctor at HAPAG-Hamburg. In 1930 he became an assistant doctor at the University Women's Clinic of the Charité in Berlin , which started his scientific work. After the " seizure of power " by the National Socialists , he joined the SA in 1933 . In 1937 he was registered as a candidate for the NSDAP . In 1939 he became senior physician and deputy director of the University Women's Clinic in Berlin under Walter Stoeckel . Kraatz completed his habilitation in 1940 at what is now the Humboldt University in Berlin . During the Second World War he was a naval doctor from 1940 to 1944.

In 1948 he received a professorship with a teaching assignment at the Humboldt University in Berlin. In 1949 he was appointed professor of gynecology and obstetrics at the University of Halle (Saale) , where he was dean of the medical faculty from 1950 to 1951. In 1951 he took over the chair for gynecology and the management of the university gynecological clinic of the Charité, where he was dean of the medical faculty of the Humboldt University from 1954 to 1956. In 1953 he was elected a member of the Leopoldina and since 1956 he has been a member of the Academy of Sciences . In 1961 he was appointed holder of the chair for gynecological diseases and obstetrics. He was active in many health care bodies in the GDR and abroad and was considered the most important gynecologist in the GDR. After retiring in 1970, he worked since 1972 as a member of the Presidium of the Kulturbund der GDR and as chairman of the club of cultural workers "Johannes R. Becher".

Through the reconstruction of the women's clinics in Halle and Berlin, as well as through his competence in gynecology, he received various awards, such as the Goethe Prize of the City of Berlin and the Humboldt University in 1956, the National Prize of the GDR 2nd class in 1960 , the Patriotic Order of Merit in 1962 Silver, 1972 in gold and 1977 the honor bar for the Patriotic Order of Merit in gold and the honorary plaque of the Minister for Higher and Technical Schools of the GDR for "services to the higher and technical college training" , 1963 the Pirogow Medal of the Academy of Medical Sciences of the USSR, 1970 Awarded the academic degree Dr. sc. med. by the scientific council of the University of Berlin, 1972 honorary doctorate to Dr. med. through the scientific advice of the University of Berlin and many other domestic and foreign honors.

After his death on June 13, 1983 in Berlin, the Helmut Kraatz Prize was founded in 1985. This was created in his will by the late scientist for scholars who have made significant contributions to the development of the field of gynecology.