I killed my mother

I Killed My Mother is a Canadian feature film by Xavier Dolan from 2009 that was shown in German cinemas in 2011. The film was shown in Switzerland in 2010 with the Germanized title I killed my mother .

Hubert is 16 years old and has recently started a relationship with his classmate Antonin. His parents have been separated since Hubert was three years old. The mother Chantale always spoiled him and is now overwhelmed by the angry and rebellious Hubert, who has everything to complain about his mother. There are more and more hateful arguments between son and mother, as Hubert can no longer endure them and living together. This starts with little things, like her habit of putting on makeup while driving or always listening to the news, and ends with her habit of making promises that she revokes the next day. Hubert processes his feelings, among other things, by talking to himself, which he records on a video camera. There are days when he hates his mother. At the same time, he would defend her if someone attacked her - his conflicting emotions confuse him. In art class he draws a dark picture that he calls The Son . Later he is supposed to answer questions about his parents' work for a homework assignment and asks his teacher Julie Cloutier to be able to question his aunt, because his father has disappeared and his mother is dead. The teacher is shocked and allows him to. A little later Chantale appears and is outraged to confront her son, but he runs away from her. Julie later takes him with her in the car and they both have a conversation about their parents, so Julie has not heard from her father for ten years.

Hubert sees a solution to his problem with his mother in moving into his own apartment. He inherited money from his grandmother, which his mother managed for him until he was 18. With the money he could pay for an apartment. Chantale thinks it's a good idea at first and Hubert is enthusiastic. He visits an apartment that he would like, but Chantale changed her mind the next day, saying that it is impossible for a 16-year-old to move into his own apartment. Again Hubert is full of hate, but tries to improve. For one day he does all the housework, washing, cleaning and cooking and then takes care of the dishes. Chantale is amazed and goes to the solarium with her friend. Here she meets Antonin's mother and learns from her that Hubert is gay and Antonin's boyfriend. She is amazed and hurt because Hubert didn't tell her about it. In the evening she offers him to take him to the video store. There, however, Hubert cannot decide on three films and leaves Chantale waiting in the car for 45 minutes. At some point she continues and reads Hubert up a little later, when he has already made his way home on foot. Again there is a violent argument, which has not yet ended at the front door. When Hubert refuses to help Chantal carry the shopping, she leaves him at the front door and drives away. Hubert goes to Antonin, who is not at home. In the end he ends up with Julie, who only lets him stay with her on condition of silence. If she is discovered, she threatens to be dismissed as a teacher. In front of his mother, who calls him, Hubert claims that he is with Antonin and that he will not be returning home anytime soon.

Hubert spends the next day with his friend when his father calls and arranges to meet him for a movie night. At his father's, however, Hubert meets Chantale. Both parents make it clear to him that because of his behavior they only see one possibility: Hubert is going to boarding school. So he also has a chance to improve his poor academic performance. Hubert is desperate, but has no alternative. He says goodbye to Antonin and also to Julie. At boarding school he befriends a classmate. When the school year is over, they both go dancing in the disco, Hubert takes speed and kisses his classmate, but after a short time hurries out of the disco. He talks a lot to his mother when he is on drugs and says that everything will be fine as long as they both have each other. The good relationship between mother and son is clouded when Hubert learns that he will have to go to boarding school for the next school year. He bitterly reproaches her, threatens to never speak to her again from the age of 18 and accuses her of her inability as a mother. She in turn says that he will never have children because he is gay. She makes it clear to him that she is disappointed in him, since she first learned this information from a woman who was strange to her. In the ensuing argument, Hubert becomes violent and shortly afterwards is horrified at himself. Chantale sends him away and Hubert spends the last few days before school starts with Antonin. Back at boarding school, he was beaten up by two students for being gay. He's running away. Meanwhile, Chantale finds the video cassettes in Hubert's room that he has recorded about his feelings and watches some of them. This changes her view of her son. A little later, the school principal informs Chantale of the son's escape and says that a gentleman in the house would not harm the boy. On the phone, Chantale is more and more indignant about the aloof academics who think they can shift their inability to them as a mother. In a rage, she quits Hubert's boarding school at the end. She learned from the director that, according to a letter he left behind to his mother, Hubert was "in his realm". This is a house by the forest where the family lived until they separated. Chantale finds Hubert and Antonin here. Her son is sitting by the lake and Chantale sits down with him. They start holding hands. A film with Hubert as a child and Chantale as the happy mother is recorded. 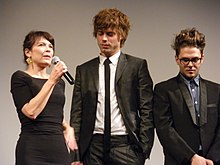 Anne Dorval, François Arnaud and Xavier Dolan (from left to right) at the screening of the film at the Toronto International Film Festival 2009

I Killed My Mother was Dolan's directorial debut. It is a semi-autobiographical film, as Dolan also dealt with his relationship with his own mother in the film: Dolan left school at the age of 17, which upset his parents, “especially his mother, with whom he lived, and because he found their excitement so stuffy, he moved out. ”Dolan wrote the script at the age of 16 and 17, respectively. He financed the film in parts himself and shot it without any previous experience in directing. He also took on the leading role, but as a child had already stood in front of the camera in commercials and was able to gain experience as an actor in smaller film and series appearances.

Dolan submitted the film to the Cannes International Film Festival in 2009 , where it was screened in the Young Directors' film series (Quinzaine des réalisateurs) on May 18, 2009. It was shown in Swiss cinemas on March 11, 2010 and was also released in German cinemas on February 3, 2011. The broadcaster arte showed I killed my mother for the first time on February 8, 2012. It was released on DVD in Germany in 2011.

Der Spiegel called I Killed My Mother a “fiery screen duel between him [Dolan] in the form of the ingenious but spoiled beast and Dorval in the role of the sympathetic but uncomprehending petty bourgeoisie.” For the film service , the film was “a ... sensitive ... , credibly played… Coming-of-Age story without lurid exaggerations of the conflicts ”“ Here is a highly intelligent narrator who is very conscious of his means at work, whoskilfully incorporatesthe influences from François Truffaut to Wong Kar-wai […] into them and even an astonishing debut and developed its own, extremely youthful film language, ”said Die Zeit . Critic.de said that the film captivates with “its refreshing naturalness and coherent references”.

At the Cannes International Film Festival, Xavier Dolan received the CICAE , Prix Regards Jeune and SACD awards for I Killed My Mother 2009 . In 2010 the film was nominated for a César for Best Foreign Film . In the same year he won the Claude Jutra Award of the Genie Awards . He received a Prix ​​Jutra for Best Picture in Québec, for Best Actress and Best Screenplay. He was also nominated for a Prix Jutra in the categories of Best Actor and Best Director. In 2010 the film also won a Prix ​​Lumières for Best French-Language Film.

I Killed My Mother | Heartbreaker | Laurence Anyways | Don't say who you are! | Mommy | Simply the end of the world | The Death and Life of John F. Donovan | Matthias & Maxime