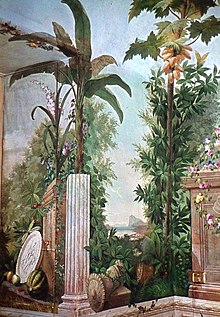 Fresco in the Crown Prince's Apartment in Schönbrunn Palace

Bergl was a student of Paul Troger , whose main works include the marble hall in Melk Abbey , and a friend of Franz Anton Maulbertsch .

Bergl became one of the favorite painters of Empress Maria Theresia (1717–1780), for whom he created frescoes in her private apartments in the so-called three Bergl rooms in Schönbrunn Palace around 1770 , the Gisela apartment, the Goess and the Crown Prince apartments (the Frescoes were later covered with gray canvases and only removed in 1891 and restored in 1965).

In 1773 he created the fresco room for the Count family Kletzl in Donaudorf Castle near Ybbs . (The castle was blown up in 1954 as part of the construction of the Ybbs-Persenbeug power station , the removed frescoes were transferred to Laudon Castle next to the library in 1963. )

Bergl also worked on behalf of the church:

Many of his paintings show paradisiacal garden landscapes, which he integrated harmoniously into the room architecture with illusionistic skill. With its idyllic landscapes full of exotic plants and romantic scenes, Bergl created a new variation of illusion painting .